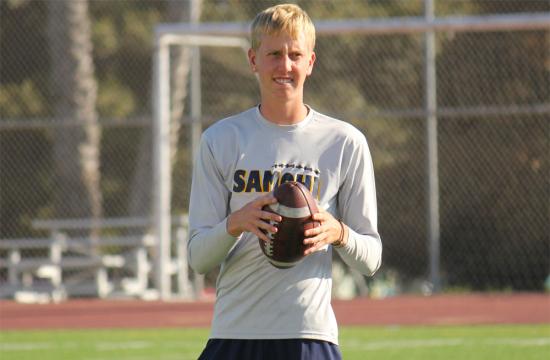 Santa Monica High School football is ready to take on the competition with their intense style of division one play returning a number of starters to lead a team that went undefeated in the Ocean League at 5-0 and posted an impressive 8-4 overall record for the 2013 season.

Vikings football head coach Travis Clark said that he has seen the excitement for the return of fall football pervade the campus at Samohi.

“Everybody is excited about football,” said Clark “The spirit is in the air.”

The Vikings look set to amaze the Samohi home crowd with a cluster of acrobatic agility found in their running backs and receivers while a large offensive line digs in to take on the fray in the trenches.

Running back Will Taylor returns to play his third year on varsity and Clark said that he expects Taylor be a leader on the Samohi team.

“We have a lot of guys returning,” said Clark.  “Our number one guy is Will Taylor. We are really excited about what he is going to do this year.”

Taylor will play running back and slot back for Samohi and according to Clark he is vital to the shaping of the 2013 Vikings football team.

“He has had a great off season and has been working really hard,” said Clark.  “He plays with lots of passion and this makes him a really good key cog and component to our team.”

Jordan Detamore is expected to fill the quarterback shoes for the Vikings after the departure of Ryan Barbarin to graduation.  Clark said that he hopes that Detamore can remain healthy throughout the season.

“Jordan Detamore has had a good summer but has had some nagging injuries,” said Clark.  “I do have some concerns about his health but if he is heathy he will be the guy to take the first snap.”

Detamore will get some help in the receiving position with returning starter Trent Hill.

Clark said he was very happy with Hill’s improvement during spring and summer ball.

“He has been looking really good in the off season,” said Clark. ” He is going to be an important part as a defensive back. Hill will be manning secondary, playing wide receiver, and backing up Taylor at running back.”

Another receiver to watch is junior Josh De La Rosa.

Clark thinks that De La Rosa is going to have a great season.

“I think he is going to have a sensational season,” said Clark.   “He is really explosive off the ball and we are excited to have him these next two years.”

Perhaps the biggest concern on offense is the Vikings offensive line that lost a good number of their giants to graduation.

“We have a young inexperienced line,” said Clark.  “We lost some great players last year.”

But Clark doesn’t seem to be too worried about his young line as their size dictates respect with sophomore Sean Wheeler at left tackle already sizing in at a whopping 6’5″ 250 lbs and three year starter Matthew Galvan at 6’2″ 255 lbs.

“These guys are probably the biggest group of guys we have had on the team,” said Clark.  “They are physically bigger then what we have had in the past.”

On the defensive line outstanding defensive tackle Justin Nelson, a junior who started last season during the Ocean league games, is set to lead the big group of junior defensive line men.

All Ocean League kicker and workhorse Denicio Gonzalez-Drake will start at middle linebacker and set the tone for the defense before switching over to offense to pound defenses as the Vikings fullback.

Clark said that Gonzalez-Drake was a key component to the defense of the Vikings.

“He sets the table for our defense,” said Clark.

De La Rosa will help out commanding the secondary along with the explosive play of Taylor and Hill.

A wild card can be found in newcomer Kuame Duggins who just recently transferred to Samohi but whose prowess was apparent from the moment he stepped foot on the football field.

Clark said that he expects Duggins to develop into a division one football player and will be playing running back along with Taylor as well as doubling as a defensive back on defense.

“I think he is going to be sensational as a football player,” said Clark. “He is such a wonderful human being and loved on campus, and he has only been here a few months.  He is one of those.”

Clark said he is happy to coach the Vikings football team as this role affords him the opportunity to not only have fun but be part of a team that he loves.

First game of the season for the Vikings is away against Redondo Union on Friday, Sept. 6 at 7 p.m.