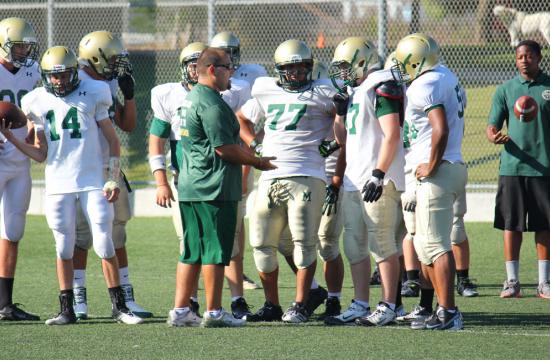 The St. Monica Mariners will kick off their football season Aug. 30 boasting a strong team that has been itching to return to the field of battle after making it all the way to the CIF Semifinals in 2012.

St. Monica edged-out hard-hitting teams in the playoffs such as Kern Valley and Boron to finish strong at 8-5 for the 2012 season.

St. Monica Football Head Coach Adam Guerra said the Mariners have practiced hard in the off season and are ready for the upcoming 2013 football season.

Guerra said the commitment of the players in his program is at an all-time high.

“We have a lot of guys that have been consistent in the program and have been here for two or three years and that makes the world of difference,” said Guerra. “Our offensive line is much bigger this year and the whole group is back to carry the load and pave the way for our young group of quarterbacks and running backs.”

The strength of the Mariners can be found in their returning squad of linemen set to battle it out in the trenches led by three year starter Andrew Miller who returns to play tight end along with a well-balanced, big, and seasoned offensive line.

At quarterback, the Mariners have had to make some changes after expected starter quarterback and senior Chris Henderson broke his collarbone in preseason camp and has been sidelined with the injury.

Yet Guerra said Henderson is still a force on the sidelines as a leader.

“Chris is a great leader for the young guys but this has created a situation where sophomore is going to get to start for us at quarterback,” said Guerra. “Our starter Cameron Nuslein has an arm like a cannon, but he is a sophomore.”

A concern for the Mariners is their running game that could use more depth after the loss of star running backs Kevin Holubowski and Nick Pegnato to graduation.

Guerra assured that the new squad of running backs emerging in summer ball would be given a good offensive line to run behind.

Junior Jason Thomas and senior Jonah Tecarro are still battling it out for number one and number two at the running back position.

Linemen Erik Reese 6’2″ 220 lbs and Elias Hackney 6’2″ 240 lbs will also add some depth to both the offensive and defensive lines.

But Guerra said the tight end position seems to be the category in which the Mariners are the deepest.

“We have three great tight ends,” said Guerra.  “Andrew Miller is our starter and he’s our guy at 6’3″ 200 pounds, but there are also our sophomores Nick Allegrette who is 6’7″ 210 pounds who is doing well and Christian Gabbard 6’2″ 190 pounds. They are learning from Andrew and it’s a good set up.”

On defense Miller emerges as a dominant force again starting at outside linebacker and will be counted on to lead the defensive squad to battle.

Thomas and Tecarro look to add some depth to the linebacker corps on defense along with linebacker Jonathan Diaz who should be a force to defend for the Mariners.

Another player to watch that Guerra noted on defense was sophomore Chase Bryan who will start at strong safety for the Mariners and will be tested in the upcoming 2013 football season.

“We are really excited about Chase,” said Guerra.  “He has the chance to be a real special player.”

Guerra said that he was confident with the Mariners secondary to balance out the Mariners defensive package which includes a strong mix of speed and agility found in corner backs David Araujo, Jack Cain, and Ryen Wilson.

“I love our secondary, there are a lot of guys who got reps last year,” said Guerra.  “David Araujo, who led the team in interceptions at corner back, is playing free safety now and Jack Cain and Ryen Wilson played a lot for us in our nickel and dime packages.”

Sammy Saldibar, the kicker who booted the Mariners into the semi-finals of the 2012 CIF playoffs with his last second kick over top-seeded Boron, is also returning.

First game of the 2013 season is at home against Village Christian with the opening kickoff at 7 pm.