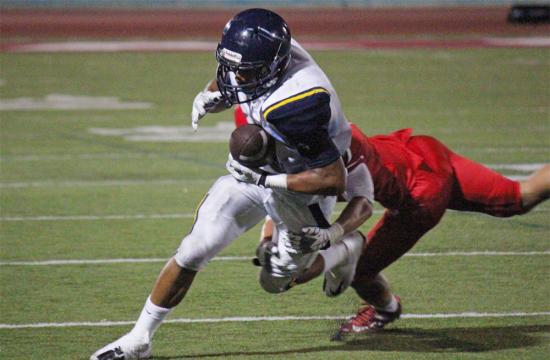 With under a minute left in the Santa Monica High School (1-0) football game against Redondo Union (1-1) head coach Travis Clark breathed a sigh of relief as the Vikings had come back from a 14-7 deficit that was crowned by a field goal by Denicio Gonzalez-Drake to win the game 17-14 at Redondo Union High School Friday night.

Clark was happy with the outcome of the game and that the Vikings played for four full quarters.

“We won,” said Clark.  “We made a lot of mistakes but it’s awesome because they are correctable.”

Samohi found themselves trailing early in the fourth quarter but Vikings quarterback Nico Basile, who replaced Jordan Detamore late in the second quarter, got hot connecting with receiver De’Jai Whitaker for a 12 yard touchdown reception to even out the score 14-14.

Clark said that the decision to replace Detamore was made because he wanted a healthier quarterback to take the helm and Detamore was not a hundred percent.

“J.D. has been having some back problems and was having trouble giving our receivers opportunities,” said Clark.  “It’s my job and responsibility to give these kids an opportunity to win.”

The Seahawks offense that had dominated the game in the first half stumbled in the fourth quarter and gave the Vikings a chance to muster together one final fourth quarter 62-yard game winning drive that began with a 22 yard reception by wide receiver Keven Person.

That was when Samohi running back Kwame Duggins began picking up some good chunks of yardage on the ground that advanced the Vikings close enough for the 28-yard Gonzalez-Drake field goal.

Clark said that the fourth quarter turned around for Samohi soon after a blackout gave the Vikings time to think.

“I think what happened was when the lights went out, it broke our bad momentum and it gave the kids the opportunity to slow down and reflect,” said Clark.  “We just said, lets eliminate the mistakes and do what we can to play football.”

First game jitters penalized the Vikings six times for 57 yards during the first half at crucial moments right when the Vikings were building up momentum and giving the Sea Hawks excellent field position, but the Vikings came out and did what they had to do to win the football game.

MVP Gonzalez-Drake did his duty as a punter time and again bailing the Vikings with his punts before anchoring the defense as a middle line backer and then pounding away at the Seahawks as a fullback on offense.

Clark said he was happy with the way the Vikings played for four full quarters.

“The most important thing is that I thought we made enough plays to win this game,” said Clark.  “I love my kids for playing for four quarters.  If there is anything that we can learn from tonight is that my kids are resilient.  It’s awesome to know that game one my kids had to fight.”

Next game for Samohi is away against Pacific Palisades Friday Sept. 13 at 7 p.m.