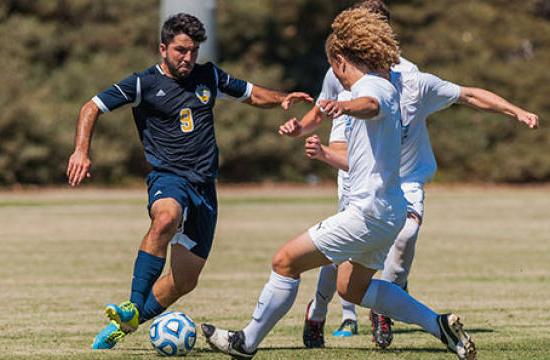 With a sixth straight victory, all by shutout, UCSD moved to 8-1-1 overall and 6-1-1 in the CCAA, assuring sole possession of first place atop the South Division at the exact midway point of the conference season. Cal State East Bay dropped to 2-7-1 overall and 2-5-1 in league play.

Senior All-American goalkeeper Josh Cohen and his mates have gone 583:59 without surrendering a score, now UCSD’s longest shutout streak of the Division II era. The Tritons had a previous stretch of 503:37 just last year.

In addition, this is now UCSD’s longest win streak since moving up from Division III for the 2000 season. The Tritons previously won nine straight in 1996.

“I can attribute it to a couple of things,” remarked sixth-year UCSD head coach Jon Pascale about this run. “The first is our team mentality of one day at a time. It is really important for us not to get ahead of ourselves, and make sure we are focusing on the present. Two, we have seniors and leaders, guys who have heard and seen it before. Guys who then can continue to make sure the group is taking it one day at a time.”

Each team had one decent scoring opportunity over the first 27 minutes, but the most notable occurrence still may have been a short delay toward the beginning for a deer.

UCSD made sure that there would indeed be some action of the soccer variety in the opening stanza, however, as in the 28th minute, Brandon Bauman provided a low cross from the right for fellow junior college transfer Alessandro Canale (Santa Monica High School, Santa Monica College) to turn in from about 10 yards. The result was both a team-leading fourth strike for Canale on the year, as well as a team-best fourth assist for Bauman.

Just 92 seconds later, it was Bauman again with a cross from the right, this time for senior center back Alec Arsht to head in off the near post for his first goal of 2013.

With under 10 minutes to go in the opening period, East Bay’s first corner kick of the afternoon led to Nate Durio going narrowly wide of the target with his shot. In the 42nd, Rey Suarez found the crossbar with his free-kick effort from 20 yards.

An early second-half flurry necessitated Cohen’s first save of the day off the foot of Rica Guerra. Derrek Duke Driggs’ attempt off the rebound hit a defender and the post on its way out of play for a Pioneer corner kick.

UCSD mustered just two shots in the second half, but it had already generated all of the offense it needed, and then some. Arsht, fellow senior center back Gavin Lamming, junior left back Matthew McClure and redshirt freshman right back Brett Sampiere (Solana Beach/Torrey Pines HS) have made up the Triton back line for virtually every minute of the current defensive stretch.

Cohen completed the 90 minutes with the one save, while senior counterpart Bryce Bookhamer wound up with zero stops on the afternoon. The final shots tally was even at 7-7.

Having concluded a season-opening draw of seven of 10 games away from home, UCSD will now play seven of its final eight regular-season contests in La Jolla, beginning with a prime time 7 pm affair with South Division rival Cal State San Bernardino on Friday, Oct. 11, at Triton Soccer Stadium.

“We are happy with where we are at,” concluded Pascale about his side’s 10-game positioning with home matches ahead. “We’re exactly where we’re supposed to be at this point in the season. We are looking forward to this home stretch. In this conference, there are no easy games, and no days off. This next weekend will be no different, especially playing against two teams from the South (Division). The key will be just taking it one day at a time.”