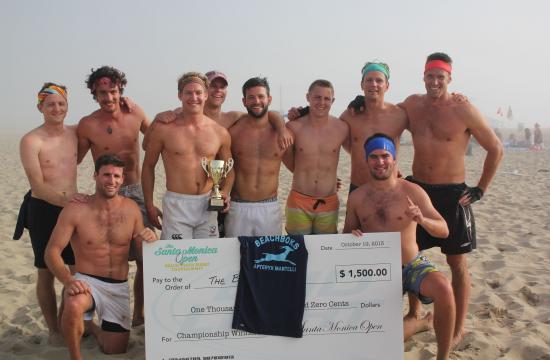 More than 200 beach rugby players and more than 1,500 rugby fans and family made their way to Tower 28 at the world famous Santa Monica beach for a 20 team beach touch tournament on the same beaches where ruggers have been playing social rugby every Sunday, Tuesday and Thursday for the past 40 years. The event gave rugby players, for the first time in Santa Monica, a chance to see who was the King of the Beach in both a Champion Tournament and a Mixed Social Tournament.

The Mixed Social Tournament put a twist on 6-Touch Rugby with the rule of any female player who scored being awarded double points which added for extra strategy for the teams to get their ladies over the try line. Numerous teams joined the action for the fun and social event including several teams with players playing organized rugby for the first time. After the day was done and 15 mixed social matches were played, the local beach team: “The Venice Vikings” came away with an upset over the Santa Monica Rugby Club’s mixed social side “The Fighting Kelp” and was awarded The Cup and the $500 CASH prize. Daralisa Kelly was named MVP of the Mixed Social Tournament.

On field one, the championship tournament took place with an extremely high talented group of clubs fielding the 12 team bracket. Participating were established clubs like the Los Angeles Rugby Club, the Santa Monica Rugby Club, Beaumont RFC and the Santa Clarita Tigers. Also entered were well known touch clubs such as the Santa Monica Beach Boks, the LA Royals, the Del Mar Hoodz and Beverly Hills.

Southern California powerhouses, the Half Nelsons, Beach Boks, SMRC and LA Royals cruised into the playoffs as expected. The quarterfinals included four extremely high tempo matches and we nearly saw the upset of the tournament as the SMRC Youth program took the SMRC Senior Men’s team to overtime and almost came away with the win before succumbing to the men 3-2 in sudden death format.

In the semifinal, the defending national 6-touch champions, the LA Royals, battled against the Beach Boks in match that drew maybe the largest crowd of the whole tournament. The crowd cheered loudly and attracted onlookers with “oohs and ahhs” as the Boks eked out a 3-2 victory in their hardest test of the tournament. In the other quarterfinal match the South African Squad, the Half Nelsons, lost their only game of the tournament vs the Santa Monica Rugby Club.

The proceeds from the tournament will be applied to programming costs associated with Santa Monica Youth Rugby programs provided for teams ages 8 to 18.

The Santa Monica Rugby Club and the Santa Monica Open Beach Touch Rugby Tournament organizers would like to thank their sponsors and volunteers, without whom, the tournament could not have been a success.