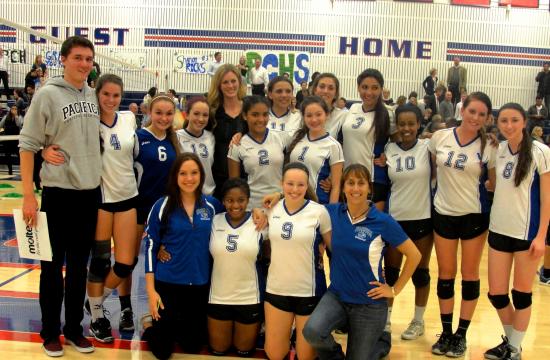 The Pacifica Christian volleyball team waited a year to get back to the CIF Southern Section Division 4-A championship game. Now they’re back. The Seawolves defeated Cate in five sets to advance to the title game this weekend.

Just last month, Cate had beaten Pacifica Christian in four sets to knock off the Seawolves from their top ranking perch. Tuesday night, Pacifica Christian returned the favor on the Rams. Cate came into the CIF Division 4-A semifinals as the top-ranked team and ranked No. 6 in the state.

Led by Maile Lane, Grace Minchin and Shanon Volpis, the Seawolves effectively erased the Rams’ rankings. Minchin produced 20 kills, while Lane came up with 19 kills for the Seawolves against the Rams.

The Seawolves got their groove back to snag the third set 25-22. The back and forth match then saw Cate win the fourth set. Coming out with renewed energy with a pro-Pacifica Christian crowd behind them, the Seawolves played their into the CIF championship game with a 15-11 fifth set win.

Volpis had six blocks and Lane and Chloe DeRoon both came up with 10 digs apiece to pace the Seawolves (22-5) to the win. Coach Julie Bennett said it felt good for the Liberty League champions to get back to the title game.

“It feels fantastic,” Bennett said. “The girls did a really good job of battling through adversity. Momentum was changing all over the place. They fought so hard. Both teams fought, fought and fought. In the end, we were able to battle through adversity better. I’m really proud of them.”

There was a distinct difference in the way the Seawolves played Cate the first time around, Bennett said.

“The last time we played them we kind of played not to lose as opposed to playing to win,” Bennett said. “The focus was to do everything you can to win. The focus was the match at hand. I think we were confident coming into it and we’ve been preparing in practice and the girls have working really hard.”

Lane said it was a matter of will that determined the outcome of the contest.

“It’s amazing,” said Lane. “We deserve to go back. We worked so hard to be there. It means the world to our coaches, our team, to people who left the team that wanted to win.”