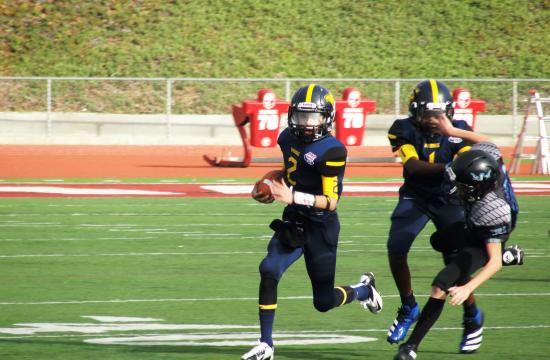 The Nighthawks are just one win away from advancing to the National Championships in Florida. It could have easily have been the Vikings playing for the right to compete for the national title.

The defeat was heart-wrenching for the Vikings’ players and coaches. Afterward it took coach Shannon Miller a minute or two to gather his thoughts about the season and the missed the opportunity the Vikings had. The Vikings held a 20-16 lead deep into the fourth quarter until Arizona scored the winning touchdown to go up 24-20.

The Nighthawks would end up adding two more points to come away with a 26-20 road win at Redondo Beach Union High School in Redondo Beach.

The Vikings had made it this far by securing a 33-24 win against a San Diego team. The Vikings finished the season 11-2. Standouts for the Vikings against the Nighthawks include Luca Diamont, Xavier Osbey, Christian Miller, Donovan Parks, and Miller Moss.

The last two quarters proved to be rough going for the Vikings as the team never really presented a serious drive to finish off the Nighthawks. But if you want to measure heart, the Vikings showed it, battling hard on every play until the clock hit zero. That is when everything sunk in for all of the players representing Santa Monica, Culver City, Venice, Malibu, and Inglewood that their fairy tale run was over.

Despite the defeat, Miller said this season was a great experience for him.

On the loss itself, Miller said it was a matter of not being able to communicate.

“There was a breakdown in communication in the second half,” Miller said. “The boys did what they were taught to do.”

The Vikings’ season isn’t quite over. Their run to Florida may be squashed, but the Vikings still have an opportunity end the season a high note. Miller said the team has been invited to play in a bowl game.