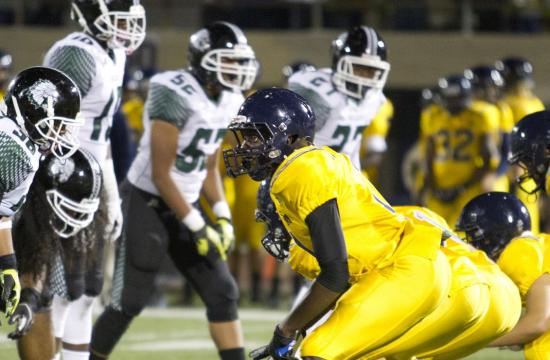 This much is true about the Santa Monica High School football team: win or go home. That’s pretty much the mantra for every team now engaged in the playoffs. The first season is officially over. Now the real fun begins for the Vikings.

And that starts with its CIF Southern Section Western Division playoff game against Pacific View League’s third seed Channel Islands at Santa Monica High School. Samohi (6-4), which claimed the second spot in the Ocean League, have a steep mountain to climb to get to the title game.

The way things are set up now, the Vikings will eventually have to go through Mission League runner-up Chaminade. But the tough running of running back Kwame Duggins may help Coach Travis Clark and his teammates to get there. This is where the Vikings’ strength lies.

For Samohi to have sustained success throughout the postseason, all channels must go through Duggins, a big-time runner capable to taking the team on his back and carrying them deep in the postseason. As far as talent goes, Duggins is the real deal.

He’s big, fast and has a nose for the goal line. In 10 games this season, Duggins has rushed for 1,208 yards and scored eight touchdowns on the ground. As a team, Samohi has rushed for 2,128 yards. After Duggins, the dropoff is pretty steep for the Vikings in the run game department.

With junior quarterback Nico Basile 51 of 115 passes for 775 yards this season, it is pretty obvious to opponents who they will have to stop in order oust Samohi from advancing in the postseason. Dual-threat signal-caller Jordan Detamore should cause havoc for Channel Islands and help lift the running burden off of Duggins, a senior.

Duggins’ biggest game of the season thus far was against Ocean League rival Beverly Hills where he rushed for 195 yards and two touchdowns on just nine carries.

His second biggest output took place against Culver City. Duggins nearly lead Samohi to a win against the eventual Ocean League champions, rushing for a game-high 163 yards and two touchdowns on 26 carries.

Out of the team’s 10 regular season games, Duggins has rushed for 100 yards or more eight times.

But the Vikings are far from being a one-man show. Defensively, Samohi has one of the better squads around. The Vikings’ defense has certainly played up to par this season. That probably is not more evident than in the secondary where the Vikings have picked off opposing quarterbacks 13 times.

Samohi’s defense, which produced eight sacks in a defeat to Valencia, can also get after the quarterback. The Vikings have recorded 40 sacks on the season. More important than statistics is momentum. After a crushing 17-14 loss to Culver City, Samohi seemed to have rebounded quite nicely, securing shutout wins against Inglewood and Hawthorne to close the regular season out.

In those two games, Samohi outscored their opponents 63-0.