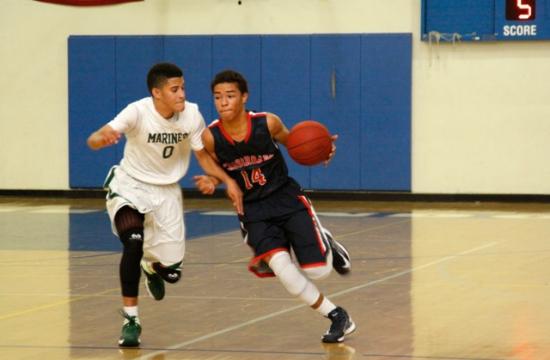 After opening the season with three straight defeats, Crossroads boys basketball team went on a tear at the El Segundo Tournament, advancing all the way to the championship game. That’s where the Roadrunners’ streak ended. Crossroads, despite getting 12 points from Alex Miles and 11 more from Charlie Hall, dropped the El Segundo Tournament finale to Mira Costa 65-46.

Up next for the Roadrunners was city rival St. Monica in the second round. Crossroads jumped out to a 21-13 first quarter lead against the Mariners, expanded its lead to 39-25 by halftime and made it look like the contest would be a runaway. St. Monica had different ideas. The Mariners went on defensive lockdown mode, holding the Roadrunners to just 13 points through the third and fourth quarters combined.

In the meantime, the Mariners put up 27 points over the last two periods to force overtime. Somehow, Crossroads managed to regain the early momentum they had in the first half, outscoring the Mariners 16-7 in the overtime period to come away with a 68-59 victory.

The Mustangs then scored 27 more points in the second period, while holding the Roadrunners to just 9 points. The first half onslaught by the Mustangs was too much for the Crossroads team to come back from, despite outscoring Mira Costa 21-9 in third quarter. The damage had been done.

Still, the tournament proved to be a good measuring stick for the Roadrunners on a competitive level. The Roadrunners will play a couple of more games, including a contest with New Roads tonight before they kick off Delphic League play against Kilpatrick on Jan. 7.

So far this season, opponents have outscored Crossroads, putting up 407 points. Led by Miles and Hall, the Roadrunners have scored 353 points on the season thus far.