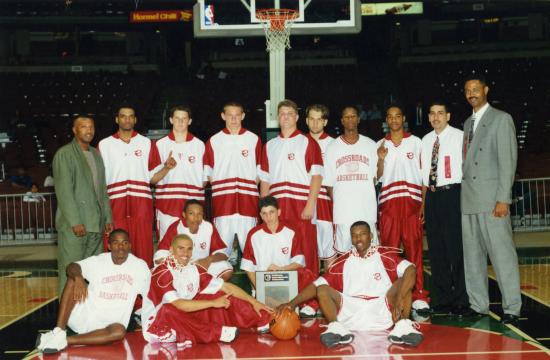 Crossroads School for Arts & Sciences in Santa Monica has announced the inaugural honorees into its newly created Athletics Hall of Fame. The Hall of Fame was created to maintain the rich heritage and tradition of successful athletics at Crossroads.

It will also serve as a means of recognizing, preserving and honoring the student-athletes, coaches, teams and individuals who have made significant contributions to the school’s athletic program, which is celebrating its 40th anniversary this year.

The Class of 2014 inductees include:

He was also selected to play in the McDonald’s All-American High School Basketball Game, won the Sprite Slam Dunk Contest and was voted MVP of the Beach Ball Classic Tournament in Myrtle Beach.

He played NCAA Division 1 basketball for the University of California, Los Angeles, and he was the third pick in the first round of the 1999 NBA draft.

He played for the New Orleans Hornets, the Golden State Warriors, the Los Angeles Clippers, the Cleveland Cavaliers and the New York Knicks.

Croshere played varsity basketball his last three years at Crossroads. During his senior year in 1993, he led Crossroads to a CIF championship.

He was recruited by Providence College in Rhode Island, and he helped the team accelerate to the NCAA finals.

He was drafted in the first round of the NBA draft and picked up by the Indiana Pacers, where he played for nine seasons.

He then played for the Dallas Mavericks, the Golden State Warriors, the Milwaukee Bucks and the San Antonio Spurs before retiring to become a game analyst for Fox Sports in Indiana.

Solomon was brought up from the junior varsity baseball team in his freshman year to take part in the playoffs.

Crossroads won the CIF title in 1985 with freshman Solomon playing outfield, where he remained on the varsity squad throughout his high school career. The team won CIF again in 1987 and was runner-up in 1988.

He was a member of the National Junior Baseball Championship Team in Sioux Falls, S.D., and he earned a place on the U.S. Junior National team. He was recruited by Stanford University, where he made Pac-10 All-Conference. After graduation, he was drafted by the Philadelphia Phillies.

From 1991-94 she earned All-CIF honors. Apart from being a star softball player, she also played on the school’s volleyball and soccer teams.

She still holds a number of records at Miami of Ohio, including stolen bases, at-bats and hits.

Banks was the lead forward guard for the girls basketball team from 1987-90. She was named All-Westside for three consecutive years and also named MVP for the Delphic League in 1989 and 1990.

She was named an L.A. Times All-Star in 1989, averaging 20.2 points and 10 rebounds per game, as well as a total of 45 blocks and 62 steals to lead the Roadrunners in all four categories. She played a key role in helping Crossroads extend its league-winning streak over several years to 77 consecutive games at the end of the regular season.

She was chosen as the MVP at the Westlake School for Girls Tournament, made the Cabrillo All-Tournament Team, and she was a two-time All-CIF performer in 1989 and 1990.

Yamini-Benjamin was a forward guard for the girls basketball team from 1992-95. In 1993, she was named to the L.A. Times Westside Girls Basketball Second Team.

She was voted All-CIF in 1995 and was offered a full scholarship to Division 1 University of California, Santa Barbara, where she played basketball and earned her Ph.D.

Aside from her major accomplishments on the basketball court, Yamini-Benjamin was the 1995 League Singles Tennis champion, and she led this team to the CIF title as the No. 1 singles player.

The 1997 boys basketball team beat Calvary Chapel to take the CIF Division 4A title. They later went on to beat Encina Preparatory High School from San Jose, 91-57 to become the Division 4 State Champions, the second state championship for a Crossroads boys’ basketball team.

Cummins attended Stanford University, Harvard University and the University of Southern California. In 1970, he became the headmaster of St. Augustine’s Elementary School in Santa Monica and the following year co-founded Crossroads School, where he served as headmaster from 1973-93.

He is also the founder of the New Visions Foundation, where he is currently executive director. Cummins brought sports to Crossroads as soon as enrollment would allow, just two years after the school’s beginning.

Cummins’ philosophy has led to the unique athletics environment at Crossroads, wherein students are encouraged to love the journey while becoming the best athletes they can be, rather than define the experience based on wins and losses.