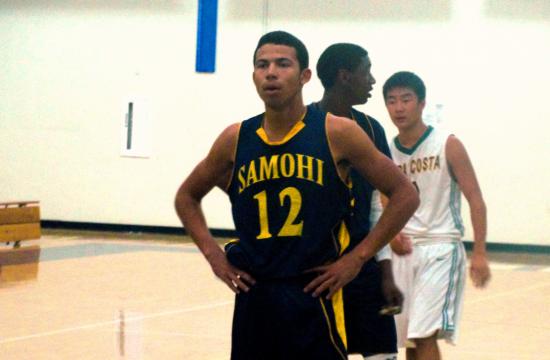 Santa Monica was still in good position at halftime of its game against Mira Costa at the El Segundo Tournament on Wednesday night to turn things around. The Vikings only trailed Mira Costa 31-25 by the end of the second quarter.

However, turnovers and some hot-shooting from the perimeter by El Segundo forced the bottom to drop out in the third quarter for Samohi.

Despite getting a team-high 18 points from Jonah Mathews and nine points from Chris Johnson, Santa Monica found itself outmatched by the bigger, quicker and undefeated Mustangs.

The Vikings were outscored 18-11 by the Mustangs enroute to absorbing a 65-46 defeat. Coach James Hecht said his team was simply overwhelmed.

“We got beat by a team that was better than us,” Hecht said afterwards. “Every game now on our schedule is important for us to get prepared for league.”

Santa Monica had just come off a 20-point win against Compton Centennial in the tournament before running up against Mira Costa.

After winning their first two games of the season, the Vikings have dropped three of their last four games, including the loss to the Mustangs on Thursday.

Mathews tried his best to keep Samohi in the game with his penetrating drives and outside shooting, but the Mustangs’ long ball (three-point shooting) prove to be too much for the Vikings in the end.

Santa Monica was beat on the double penetration by Mira Costa’s guards, which in turn, left the Mustangs’ perimeter shooters open for most of the night to connect from downtown.

Mikhail Brown added nine rebounds for the Vikings. Santa Monica’s next game is scheduled for Dec. 26 against Pleasant Grove at the Holiday Hardwood Invitational. Samohi get another shot at Mira Costa when they play the Mustangs Jan. 8 at Santa Monica High School.