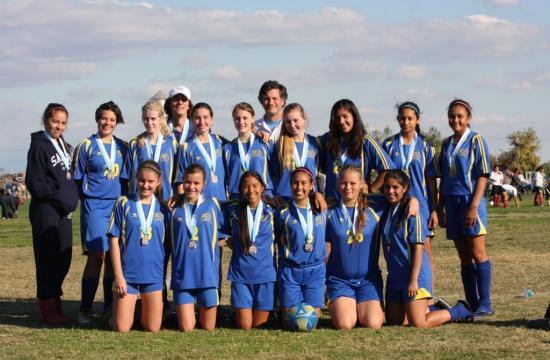 The Santa Monica AYSO Girls U16 soccer team wound up their season and pre-season play with an impressive undefeated 12-0-2 record to become the 2013 AYSO Area 1P champions.

“This is a great group of girls. Most have been playing with or against each other for nearly 10 years,” said coach Guido Davis Del Piccolo. “So, having them together on one team and representing Santa Monica AYSO so well, was indeed a pleasure.”

Area 1P is comprised of nine regions in Los Angeles including Beverly Hills, Culver City, Hollywood, Pacific Palisades, and South Los Angeles. As champions, the team represented Area 1P at the AYSO Section One tournament in Chino held on Nov. 23-24.

AYSO Section One is comprised of 70 AYSO regions from Los Angeles, Riverside and San Bernardino Counties as well as Western Arizona and Southern Nevada.

The Santa Monica girls faced two tough teams on the first day during pool play. The team continued their impressive win streak with an early morning win against the champions from Area 1G, Ontario (3-1).

The team’s afternoon game pitted them against the champions from Area 1U, Walnut, where the squad pulled off a come-from-behind 3-2 victory and clinched their berth in the semifinals on Sunday.

Unfortunately, the two games played on the second day of the tournament proved to be a bit more challenging for the team with several players recovering from minor injuries they absorbed in the prior games. Their first game was against a tenacious Redondo Beach championship team from Area 1D. The girls fought hard to the end, but were handed their first loss of the season (1-3) by the team that went on to win the Section One title.

Overall, the Santa Monica AYSO Girls U16 team finished 4th in AYSO Section One with an impressive 14-2-2 record.