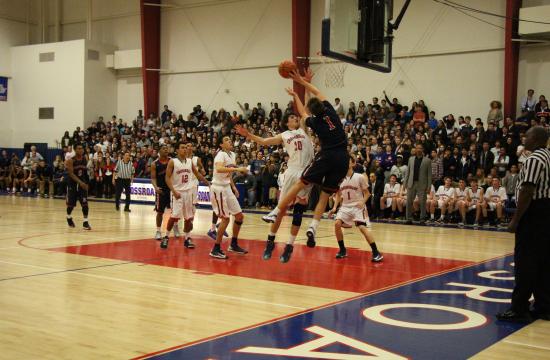 The victory made it two in a row for the Roadrunners in the win column and gave Crossroads an overall record of 8-6 before going up against Milken in a Delphic League contest Tuesday night.

Crossroads picked up its first league win of the season with a 78-34 win against Kilpatrick on Jan. 7.

The victory against Brentwood School wasn’t just a non-league basketball game; the contest was part of a full-blown viewing party of the different winter sports the two schools offer. So parents of student-athletes had their eyes full watching basketball and soccer.

The crosstown rivalry between the two schools drew a packed house this year with as many as 1,500 people coming out for the annual Sports Extravaganza. The event, which began in 2010, is unique in that it features games played by both schools’ varsity and junior varsity soccer and basketball teams.

Crossroads won the Extravaganza Cup last year. The Roadrunners made sure they kept the cup this year with victories in the boys’ varsity and junior varsity soccer matches as well as claiming the win in boys basketball.

Brentwood School, which owns a 49-24-1 winning mark in the rivalry varsity basketball game against Crossroads, didn’t go quietly in the night. Brentwood’s girls notched wins in varsity and junior varsity basketball as well as in soccer.