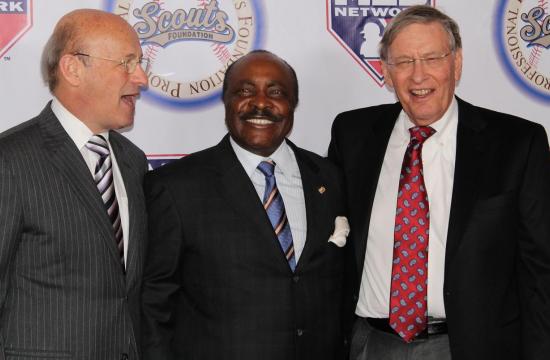 Al Downing will be tied to the hip with Hank Aaron for the rest of his life. The former Los Angeles Dodger flamethrower’s legacy will last a lot longer than that given the fact he served up the historic home run to Hank Aaron to surpass Babe Ruth as the all-time home run king back in 1974. Bigots, death threats, haters and a 94-mph fastball weren’t enough to stop Aaron’s monumental moment.

History has a way of putting things in perspective. That moment for Aaron and the rest of America wasn’t just about the Atlanta Braves slugger taking the mantle as the home run champ. It spoke significantly about how Aaron went about his way to accomplish the unthinkable.

Riding the train of obscurity to greatness, Aaron followed the path of iconic history-maker laid down by the great Jackie Robinson.

It takes a special person to do something special. Robinson did it by breaking the color barrier in Major League Baseball. Aaron did it with a majestic swing of his bat. Both men personified dignity. Both men went through a relentless stream of doubters and unfathomable attacks because of the color of their skin.

As it was, Aaron stepped to the plate against Downing on April 8, 1974, needing just one swing of the bat to own the home run mark that had become hallowed and revered as baseball’s greatest record. Aaron smacked a 3-1 fastball sent by Downing, screaming into the Atlanta night-the historic trophy landing somewhere in the left-field bleachers.

As he handled everything else leading up to that moment in time, Aaron was the cool customer as he had always been while everyone else went nuts. Aaron gave us a reason to cheer. His grace under pressure allowed all of us to take note and to quietly applaud his inner the strength in the face of true adversity.

A black man was not supposed to break the most sacred of records in baseball. Aaron did. The year 1974 was only a couple of years removed from the civil rights era, so prejudices ran amok when the topic came up. Even to this day, with Barry Bonds surpassing Aaron on the home run charts, many people still cling to the silly notion that Ruth is still the greatest home hitter of all time.

A large part of that type of ignorant thinking has to do with the racial identity of both men. However, the numbers don’t lie. Aaron’s 755 home runs trumps Ruth’s 714 dingers any day of the week. But home run 715 will always be the one to make people shiver. It is also the home run that Downing saw as a challenge.

Speaking at the Professional Baseball Scouts Foundation gala dinner in which Aaron was presented with the Allan H. “Bud” Selig Executive Leadership Award by baseball’s commissioner himself, Downing said he didn’t run from his inevitable encounter with the 25-time MLB All-Star.

“I loved the challenge,” Downing said. “He always talked about Henry (Aaron). He said this guy is one of the best. It wasn’t only the numbers accrued that people said he’s good.”

Downing followed up his take on Aaron, Downing takes issue on the fact there are less and less African Americans playing the sport of baseball these days.

“Obviously we’re not involved because you don’t see that many of us out on the field,” Downing said. “That’s a disgrace. It’s a shame and a disgrace because it destroys our national pastime.”