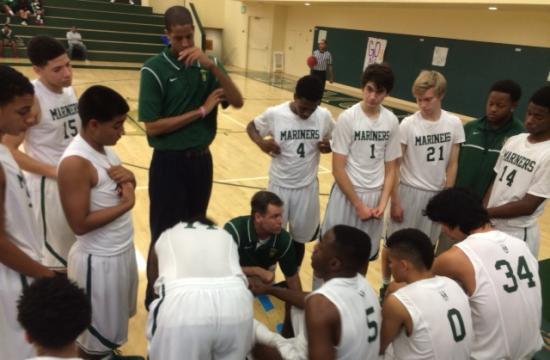 St. Monica boys basketball coach John Skinner starts his days early and ends it late. Balancing coaching with his duties as a real estate agent, Skinner is forced to use all of his time in the day wisely.

“I have to be extremely efficient with my day,” Skinner said in an interview with the Mirror. “Real estate allows me the flexibility to coach. [But] it can be overwhelming at times.”

Skinner, who guided the St. Monica girls basketball team to the CIF title last spring against St. Paul, manages to make his count thanks his open line of communication with his players and the support of his wife and family, he says. Erecting the boys basketball program is going to require Skinner to have a lot of support as he works at building the program back to its glory days.

Skinner knows a thing or two about that kind of pressure and spotlight having played his junior and senior seasons in high school along the side of former UCLA and NBA star Baron Davis at Crossroads School as a shooting guard. Skinner grew up with Austin Croshere, another ex-Crossroads phenom who also enjoyed a steady NBA career.

“That was a lot of fun,” Skinner said. “It was a great experience. When I played with Baron Davis he was 5-foot-7; I never thought he’d grow that much. He was so athletic.”

As far as Croshere, the shooting guard/forward made it to the NBA because of how hard he worked, says Skinner.

“He had a tremendous work ethic,” Skinner said. “He just outworked everybody.”

Putting in hard work is something Skinner is hoping his team has bought into. There are a couple of players on the current Mariners’ team that have the ability to take their game to the next level. Spencer Gorman is one of those players, says Skinner.

“A tremendous athlete with some good skills who just lacks quality organized playing time,” Skinner said. “This is really only his second year of organized basketball so when you look at it from that perspective, his upside is phenomenal and if he truly dedicates himself to the game he could do some things at the next level.”

It has been an up and down season for Gorman. But the senior has shown flashes of dominance at times. In a recent game against West Torrance, Gorman scored a career-high 29 points and pulled down 11 rebounds in the Mariners’ 65-49 win. In a 75-63 victory over South Torrance, Gorman put up 20 points, 15 rebounds and two blocked shots.

These are the type of numbers that Gorman has the ability to produce night in and night out, Skinner says. But because of his lack of experience in playing organized basketball for an extended period of time, Gorman sometimes struggle as he did in a recent game against Bishop Amat.

If Gorman is having an off night, Skinner has the luxury of turning to Dennis Ashley, Kavin Dotson or Kavion Simab to pick up the slack. Ashley, who was voted to the all-tournament team in the San Pedro Shootout, is the one guy in particular who can light up the scoreboard.

A new offensive scheme, however, with a new coach has slowed Ashley’s production this season, Skinner says.

“I am hoping he’ll get a little more consistent,” Skinner said. “I think there weren’t as many options (last season) so he had a little more free reign. He can be a volume shooter, but I think he’s adjusting to our style. A few more consistent games should help get him going.”

With the Camino Real League kicking off this week, now would be the time for Ashley and the rest of the St. Monica basketball team to step up their game. The Mariners begin league play against Bosco Tech and St. Paul before lacing up their sneakers against Cathedral and Cantwell-Sacred Heart, two of the better teams in the CIF Southern Section, within a seven-day period after that.

St. Monica is no slouch and figure to play well enough to earn a playoff berth. But the immediate concern for the Mariners is playing well in league play, which Skinner expects his team to do, regardless of the opponent.

“Both Cathedral and Cantwell are top tier teams in the state and are definitely the cream of the crop of our league,” Skinner said. “It presents an exciting challenge for us to see if we can rise to the competition level and truly compete.”