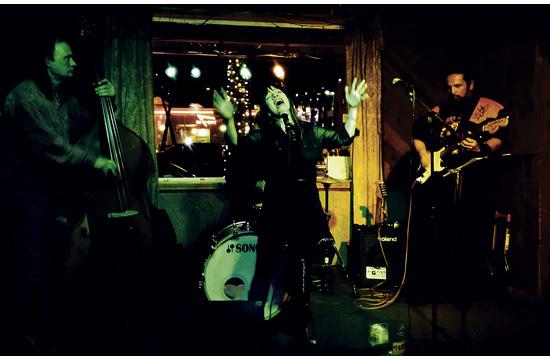 Sonny McLean’s Irish Bar may be known for its vast array of domestic and imported beers as well as it’s great tasting food. However, it also brings live music to the local Santa Monica community free of charge each and every Friday night. It also offers music on several other nights as well as karaoke.

“I love Sonny’s…we have girl’s night out almost every Friday night,” Manning said. “Sometimes we even get there early for the happy hour. But we always stay late for the music.”

Offering a mix bag of styles, this group will not only perform classic blues, but also pop, funk and even some honky-tonk.

This dynamic duo performs together in other bands most notably “The Country Legends.”

Each are strong singers in their own right…but together maximize their talents by trading vocal riffs and adding tasteful harmonies for an impromptu show.

Another charming feature of this band is the banter between Cruz and Leonardo, which is often included within the songs as well as in the introductions… creating a well-rounded and humorous show.

Bass player Petr Hromadko, originally from Czech Republic, has been a part of the Venice Street Legends for the past eight years.

Drummer Mitch Montrose was introduced to the Legends through Kathy Leonardo who he had worked with previously in several other bands.  It was an instant fit, and Mitch has now held the Legends drum throne for over a year.

Most nights you can catch owner Grant Woods sitting at the bar at Sonny McLean’s. Stop in and say hi.

“If you enjoy an unpretentious and warm atmosphere with live music, great patrons and staff you must visit Sonny McLean’s Pub,” Woods said.

Sonny McLean’s Irish Bar is located at 2615 Wilshire Bouelvard in Santa Monica. Kathy Leonardo and the Venice Street Legends will play from 9:15 pm to 12:30 am. Admission is free.

For more information about the music of Kathy Leonardo and the Venice Street Legends, visit www.kathyleonardo.com and facebook.com/TheVeniceStreetLegends.