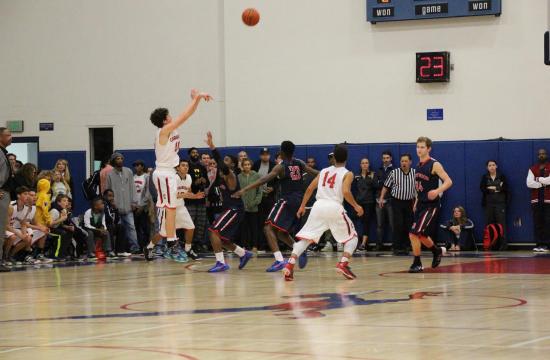 The Crossroads boys basketball team took care of business against Providence to move on to the quarterfinal round of the CIF-Southern Section 4A playoffs. The Roadrunners were in a tight squeeze in this contest, pulling out a narrow 60-52 win Friday night.

Ranked sixth in the division, Crossroads (19-5) came out in the first quarter a little slow. The Roadrunners were down as much as 11 points. The second half was a much different story. The third quarter brought out a renewed Crossroads’ team as the Roadrunners stopped Providence (15-11) from moving the ball, keeping it out of the hole and forcing less than favorable shots from Providence.

The final period was a seesaw battle with nine lead changes. Junior Charlie Hall finished the game with 15 points for Crossroads. The Roadrunners pulled ahead and maintained the lead once Hall converted an easy layup off of a pass from Alex Miles, who stole an inbound pass with 2:40 left to play in the game.

The Crossroads squad is moving into the quarterfinals this Tuesday against Windward at 7 pm in the Crossroads gym.

Against Sage Hill on Wednesday night, Crossroads came out a little slow in that game as well. However, by halftime the Roadrunners had settled back into their own style and took control of the game on their way to an easy 63-44 win at home.

A number of steals, quick rebounds and defensive pressure by the Roadrunners opened up opportunities of which the team took advantage. Chase Coleman hit a couple big shots from outside the key and then unfortunately had to leave the game due to a dislocated shoulder. Charlie Hall scored 20 points for the night.