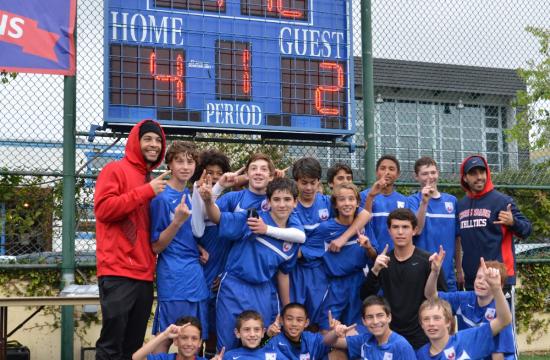 The Crossroads Middle School boys soccer and girls basketball teams both came up victorious in winning the Pacific Basin League Championships. The undefeated girls’ squad went into playoffs as the team to beat.  Their first game was away on Wednesday at Turning Point School where it was clear that the Roadrunners were nervous.

One of Crossroads’ team leaders, Mia LaFayette, got into foul trouble early and was sick, and did not  play the majority of the game. Nerves and jitters may have caught up with Crossroads’ players in the first half as the two teams stayed within striking distance of one another going into intermission.

The Roadrunners gained their confidence in the second half as Alana Cotwright, Madison Quan, and Maia Levy stepped up to lead the squad. By the end of the game, the Roadrunners had walked away with a dominating 54-26 win.

The team moved on to the Pacific Basin League Championship game on Friday against The Archer School for Girls. The eighth graders played their very last middle school basketball game with heart, giving everything they had for their team. Madison Quan and Mia LaFayette handled the defensive pressure well.

Alana Cotwright demonstrated calm and poise that set a perfect tone for the team. Maia Levy and Mae Mae Dylan played with a fire that was visible in their eyes. Soah Franklin brought much-needed energy off the bench, giving the Roadrunners an extra boost.

The sixth graders came into the game with confidence and skill. It was an impressive team win for the Roadrunners in claiming the league title.

Crossroads’ boys’ soccer team, named Team Royal, engaged in their first playoff game on Tuesday against Calvary Christian. They came away with a win and earned a spot in the semifinals. Wednesday’s game against Windward was an exciting matchup. The contest pitted a very strong Windward squad against the talented Roadrunners.

Crossroads coaches implemented new strategies during the game. The boys were able to adapt to the new play, making seamless adjustments and remaining committed to one another. Crossroads won 3-1, earning a spot in the Pacific Basin League Finals on Thursday.

The championship game had the Roadrunners going up against a strong, fast St. Paul team who took the lead early on. Team Royal stuck to their game plan, showing a huge amount of maturity and grit and fought their way back into the game. Alex Liebeskind scored 2 goals, putting the Roadrunners up 2-1.

Team Royal never looked back as they captured the league champion with a 4-2 win. Dante Perez-Mendoza was a fantastic leader, encouraging and driving the team throughout the game. Miles Wilson came off of the bench with a specific game-plan from his coaches which he was able to execute perfectly.