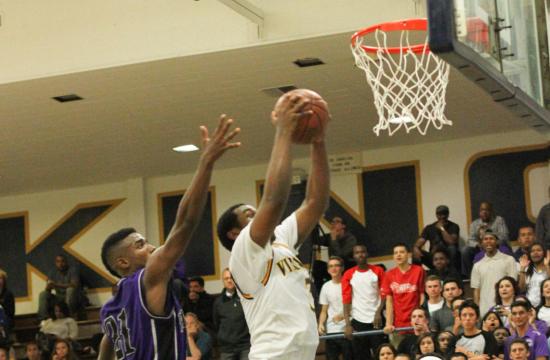 Hopes for Santa Monica High to repeat as CIF boys basketball champs were abruptly dashed by a visiting Rancho Cucamonga team on Tuesday, Feb. 25. Rancho Cucamonga took the lead in all four quarters to roll to a 74-56 CIF-SS Division 1AA win against Samohi.

Rancho Cucamonga (25-4) will now play Millikan in the quarterfinals. After easily defeating Montebello in the first round, Samohi (17-11) ran across a different and much better team in the second round. The Cougars outscored the Vikings 19-15 in the first quarter, which left Samohi within striking distance.

Rancho Cucamonga widened its lead to eight at intermission by outscoring Samohi by four more points (21-17) in the second period.

Where the Vikings lost the game was in the decisive third quarter, where the Cougars limited Samohi to just 11 points in the period. Rancho Cucamonga scored 22 points in the quarter to blow open the game, giving the Cougars a comfortable 19-point lead by the end of the third period.

Samohi managed to hold the Cougars to just 12 points in the final quarter but by then the game was pretty much over. The Vikings could just muster 13 points in the fourth period which determined the final outcome of the game.