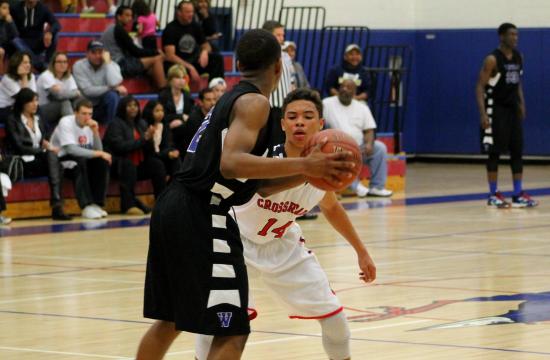 The Crossroads boys basketball team had a good run this season. But that season is now officially over. The Roadrunners went through a tough shooting stretch in the third quarter and that proved to be the team’s detriment in a 60-52 CIF-SS Division 4A quarterfinal loss to Windward at home on Tuesday night.

Crossroads managed to score just six points in that pivotal period. That, in a nutshell, was pretty much the ballgame right there.

Guard Max Pasamonte had the hot hand for Crossroads, scoring a game-high 25 points-13 points in the fourth quarter alone when the Roadrunners tried to orchestrate a comeback after being down 47-27 at one point in the ballgame.

Pasamonte’s hot shooting helped Crossroads put up 25 points in the final period. But the Roadrunners’ rally came up a bit short.

A large part of that was the Roadrunners’ inability to get open looks at the rim thanks to the height advantage that Windward had over the Roadrunners. Crossroads, which finished the season at 19-6, didn’t get a lot of good looks in the third quarter as Windward (21-8) kept the Roadrunners off the boards.

The only good looks Crossroads could muster were contested shots from the perimeter as the Wildcats played smothering defense inside the paint.

The Roadrunners had their chances, though. After cutting the deficit to nine points, there was a stretch where the Roadrunners had several opportunities to trim the lead further. Convert a couple of missed open shots near the basket and Crossroads would have made things very interesting.

At this point in the game, the Roadrunners had already shifted the the momentum to their side. One or two made shots to cut the Wildcats’ lead would have put Crossroads gymnasium in  a frenzy.

That chance came and went for the Roadrunners.Getting off to a show start set the tone for Crossroads,  which only scored 21 points in the first half. Windward, paced by Jalen Harris’ team-high 19 points in the game, scored 31 points through the first two quarters, putting Crossroads in a 10-point hole at intermission.

The Roadrunners’ third quarter debacle put them down by 20 before the team rallied. One of the keys to the game was how Windward was able to slow down guard Alexander Miles.

Miles, who finished the game with just nine points, was attacked early and often by the aggressive Wildcats’ defense, throwing off his ability to penetrate and to get his teammates set for good looks at the basket.

“Alex had a lot on his plate,” Roper said. “He wasn’t able to get to the basket because of their size.”

Despite being ousted from the remainder of the postseason, Roper said he was proud of the way his team played throughout the season. Crossroads went undefeated in winning the Delphic League title and managed to win two playoff games this season, which is pretty impressive stuff.

“I think we did an outstanding job this season,” Roper said. “We’ve proved we can play with people.”