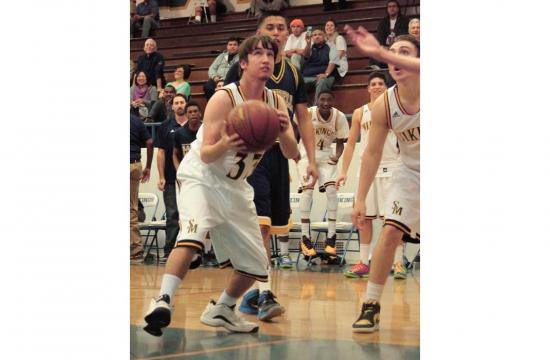 Samohi senior Matt Tapia made a bit of school history when he tossed in a  “buzzer beater” basket in the final second’s of the Vikings’ 76-45 first round playoff win against Montebello. In the last five minutes of the game, a roar came up from the stands as the student body loudly chanted: “We Want Matt, We Want Matt.”

Tapia is a special needs student who, according to his father, Santa Monica resident Rudy Tapia, was not expected to live long after birth.

“Because of a congenital heart condition, Matt was given a five percent chance of living when he was born. He had open-heart surgery at the age of nine months,” said the elder Tapia, who attends all of the games and drives a carpool, delivering some of Matt’s teammates to the games. “Matt’s a fighter. Defying the odds is the theme of his life.”

Appreciating Matt’s determination is Santa Monica boy’s varsity team captain Ray Mancini, who was never more than a few feet behind, as Matt made two attempts before sinking the final scoring basket of the evening. These two young men clearly have a mutual respect and admiration for the other’s unique talents.

“Matt’s taught me that I can overcome anything,” Mancini said. “I can be whatever I want, and strive for my dreams.”

Samohi put the game away early by outscoring Montebello 20-5 in the first quarter. The Vikings then scored 15 more points in the second period to take a 35-16 lead into halftime. That was more than enough for the Vikings to cruise to the victory. The wide-open margin allowed Tapia to get into the game.

Samohi coach James Hecht, the 2010’s Ocean league “Coach of The Year,” has supported Matt’s desire to participate in games.  After watching the play, Hecht said, “He made that basket it in the last second of the game. It was a buzzer beater.”

This is the kind of moment that creates memories of a lifetime Matt played in last year’s football game, and has been given the green light to attend Vikings baseball practice this spring.  Matt plans to attend UCLA on a special scholarship, where he plans to pursue a career in sports broadcasting.

Samohi entertain Rancho Cucamonga at home on Tuesday. The second round playoff game is scheduled to start at 7 pm.