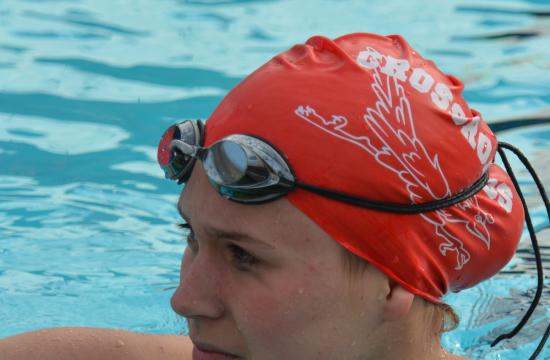 Big things are going on at Crossroads School. The sports program is flourishing this spring with an array of student-athletes shining in the spotlight for the Roadrunners. Swim phenom Zoe Darmon, a freshman at the school, has qualified for automatic CIF times in three individual races and has broken the school record in the 500 freestyle.

The boys’ swim team has qualified for CIF in the 4×100 free relay and the 200 medley with much help from freshman Luke Young, while the girls have qualified in the medley and are looking to qualify in the 200 freestyle relay as well.

On the diamond, the Roadrunners have proven to be just as good with pitcher

Jack Freedman leading the team to a 3-1 record for the season. So far this season, Freedman has 13 strikeouts through the 11 innings he’s pitched in. But Freedman isn’t the only player to stand out. The Roadrunners have a large squad with a good depth of talent at all positions.

In softball, Samantha Hardy (pitcher) has done a stellar job on the mound allowing very few hits and throwing consistently over the plate.  The softball team is undefeated in league and has a 3-1 overall record for the season.

Crossroads boys’ varsity volleyball is undefeated in season thus far: 4-0.  Lucas Kaplan is the senior co-captain and libero who has led the team with stellar defense and excellent passing. A tremendously consistent player, Kaplan’s  leadership on and off the court keeps the team focused and has helped bring them back from deficits.

In golf, Matthew Jacobson has been low medalist for the first two matches.  Tuesday he was one over par, 37 at Woodley Lakes Golf Course.

On Thursday, he once again shot the low score for the team. Matthew looks to lead the resurgent golf team whose numbers have more than doubled with a talented group of young players (there are no seniors on the team.

In boys’ tennis former Crossroads’ student Clay Thomas, has been named the No.1 men’s singles player by the ISTA. Thomas currently plays for UCLA.