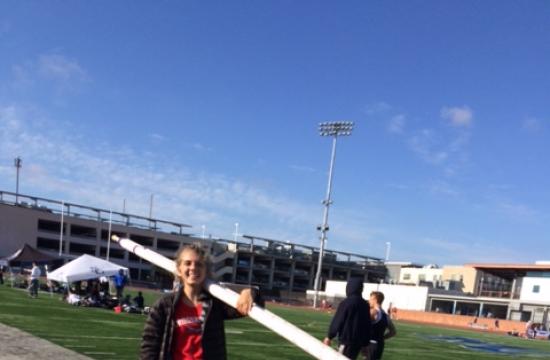 Crossroads School track and field boys and girls teams shined at a Delphic League meet that was conducted at Santa Monica College March 20. On the boys’ side, Crossroads recorded 167 points to outdistance runner-up Windward, which finished the meet with 78 points. Milken followed with 76 points, Viewpoint registered 45, and Sierra Canyon wrapped up the meet with 34 points.

On the girls; side, the Roadrunners had a much tougher time but was able to pull away from Windward, 127-93. Milken’s 50 points was good enough for third place. Sierra Canyon followed with 44 points, while Viewpoint ended with 31.

The Roadrunners had some standout performances during the meet, including dual winners Ethan Finkel and Kole Farrisse. Finkel, already recognized as one of the top long distance runners in the state, came home victorious in the 800-meter and 1,600-meter races. Farrisse was just as impressive in the sprints, recording wins in the 200 and 400.

While Finkel and Farrisse dominated their individual races, the two runners were far from being the only stars of the meet for the Roadrunners. Crossroads’ boys went 1-2 in the 200-400-800-1600 and 3200m races. The Roadrunners also went deep in the 800 and 1,600, taking the top four places in the two races.

The girls had some outstanding moments as well. Ella Larsen put on the jets to win the 800 and anchor Crossroads to a victory in the 4×400-meter relay. The 4×400 relay quartet made up of Jordan Zolliecoffer, Eloise Fassler, Morgan Lee, and Larsen set a school record in the race, clocking in at a fast time of 4:22.73.

The new mark set by the four runners eclipses the record of 4: 25.33 that was set last year by Lee, Lily Markle, Zolliecoffer, and Bella Hernandez). Besides inhaling that big moment for the team, the Crossroads girls also finished first and second in the 800 and 3,200 meters. It was quite a day for Larsen as it was for the rest of the Roadrunners.