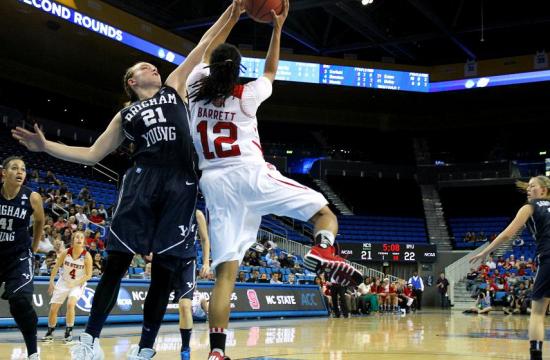 The Wolfpack simply had no answers for the strong interior presence that BYU brought to the game. North Carolina State players appeared to be exasperated time after time whenever BYU’s 6-foot-7 center Jennifer Hamson came around the basketball to either block one of their shots or at least alter them with her enormous wingspan and great timing leaping ability.

Hamson was so intimidating during the game that she nearly walked away with recording double-digits in blocked shots. As it was, Hamson finished the game with nine of the Cougars’ 15 blocked shots the team produced. Hamson  was just as dominant on the glass, grabbing 19 of BYU’s game-high 52 boards. The Cougars outrebounded the Wolfpack, 52-37.

No rebounds, no advancement. That’s what happened to North Carolina State. BYU now plays Nebraska in the second round of the NCAA women’s tournament on Monday at Pauley Pavilion. In taking a 33-26 advantage into the locker room at halftime, BYU had already built an edge in rebounding (25) and blocked shots (8). Hamson, who finished the game with 12 points, had already snatched 11 rebounds at the point in the game.

Hamson wasn’t the only star for the Cougars. Lexi Eaton scored 17 of her 25 points in the first half. Morgan Bailey was nearly as dominant as Hamson, scoring 13 points, grabbing 12 rebounds and coming through with two blocked shots and two steals. North Carolina State was led by Miah Spencer, who scored 16 points for the Wolfpack.

In an earlier game, Nebraska easily handled home state representative Fresno State, dispatching the Bulldogs 74-55. Big Ten Player of the Year Jordan Hooper led the way for the Cornhuskers, scoring 23 points and recording 11 rebounds. Nebraska now goes up against BYU in a second round game at Pauley Pavilion.