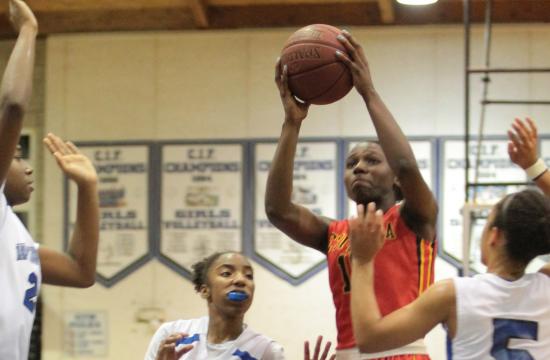 The top girls’ team in the land was one game away from the regional finals before Windward hit an Eagle road block. Etiwanda slipped past Windward 49-48, with good defense and an attacking offense that wouldn’t back down. USC-bound power forward Amy Okonkwo lead Eitwanda with 21 strong points.

The number one ranked Windward Wildcats were considered to be a sho0-in to represent the South in the state finals but UCLA bound Jordin Canada’s 23 points was not enough tonight. Canada’s squad was in a battle right from the opening tip; they trailed at the end of every quarter: 14-16, 24-29, and 37-42. Windward fought hard late in the fourth quarter and mounted a comeback that came up just short.

Etiwanda head coach Anders Anderson gave a big sigh of relief after the game. Anderson said, “It took four girls to guard her (Canada) and 10 fouls…great team effort.” The Eagles controlled the game as much as they could and slowed down Canada’s support staff.

Okonkwo gained confidence earlier in the game when she realized she had a faster step then Windward’s front court. Her drop step was money and she fearlessly pounded the glass. Then the court was opened up for point guard Mckyniz Fort to go work dropping 18 points. Then the subs from the bench kept coming to allow for fresh legs throughout the game for the Eagles.

The last seconds of the game were nerve-racking. Windward let the shot clock run out, Etiwanda turned over the ball on the throw in, and in last sequence of play with 6.2 seconds left on clock, Canada took a last jumper from the wing that went long, bouncing off the rim.

The clock buzzed with the game clock at zero and the Etiwanda bench ran towards players on the court for a big embrace.