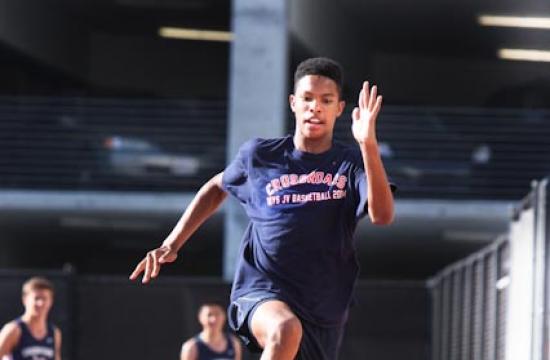 The Crossroads track and field team once again dominated the competition on Thursday at West LA College. On the girls’ side, illness and injury insured that those healthy enough to compete would face a much tougher challenge than their previous league meet.

Crossroads and Windward actually battled to the end, tying for first place with 124 points.

The girls really dug deep, with many athletes running additional events with little rest in order to try to score points for the short-handed team. Sophomore Ella Larsen once again was a dominant force on the track, winning the 800m, placing 2nd in the 400m, and anchoring the 4x400m relay for a come-from-behind victory in a stellar 62 seconds.

Eloise Fassler was runner up in the 800m and ran a powerful second leg of the 4×400 relay to put the team in contention for the win. Hannah Carey was dominant with the throws, winning both the shotput and the discus, while teammates Talia Lichtstein and Melat Lulseged added valuable 3rd and 4th place points in both events.

Sonaali Pandiri and Andrea de Oliveira bounced back from a tough race in the 1600m to place 1-2 in the 3200m keeping the Roadrunners on pace to win the meet.  The boys’ team was not immune to the sickness that depleted the roster on the girls’ lineup; however, the team showed up ready to go.

It was a total team effort, with 17 different boys scoring points for the team.

The 800m race was a highlight, with Crossroads placing 1-2-4-5. The Roadrunner also placed first through third in the 3200M and first and second in the 1600m.

Ethan Finkel was once again a double winner in the 800m and 1600m, while teammate Daniel Allen was a close second in the 1600m and tied with Ethan for the win in the 3200m.

Sophomore Alex Groenendaal-Jones was a close second to Ethan in the 800m with a season’s best time of 2:09, followed in short order by Chase Kassel (2:12) and Andrew Wedeking (2:14) who both ran personal best times for the event.

At the end of the day, the boys’ squad once again nearly doubled the point total of the second place team, Windward.