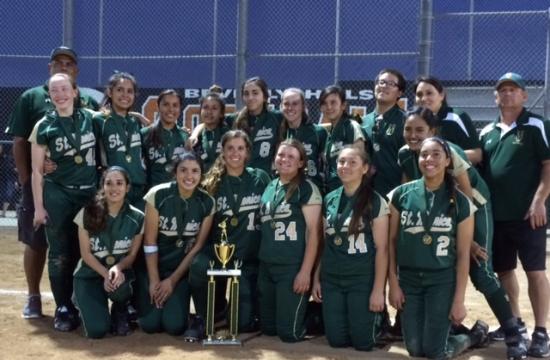 St. Monica softball coach Joey Carrillo has his team playing at a high level right now. In fact, the Mariners are undefeated entering their Camino Real League matchup against an elite squad.

This afternoon the Mariners will test their undefeated mark against one of the top teams in the respective division-Cantwell-Sacred Heart.  St. Monica currently boasts a 9-0  record and is coming a great stretch in which the Mariners recorded a 4-0 mark against tough opponents in the 11th Annual St. Monica’s Catholic High School Softball Classic.

The Mariners defeated Leuzinger, Rolling Hills Prep, Notre Dame before claiming the championship with a 2-1 win over Culver City. it has been a matter of great defense and solid team play all around, Carrillo said.

“They’ve pretty well,” Carrillo said. “This one of the strongest teams we’ve had. They’re jelling together. This year we’re pretty-well balanced. We’ve had three freshmen and a sophomore come in…we’ve had different girls at different times come through for us.”

The best part of the season so far was the way the team performed during the recent tournament in which the Mariners swept all four opponents they faced. This might be the catalyst in which his team plays for the rest of the season, Carrillo said.

“That was a big accomplishment for us,” Carrillo said. “We’ve never won it before. For us to win it, it was a great way to send them (seniors) out. It raised their level of play.”