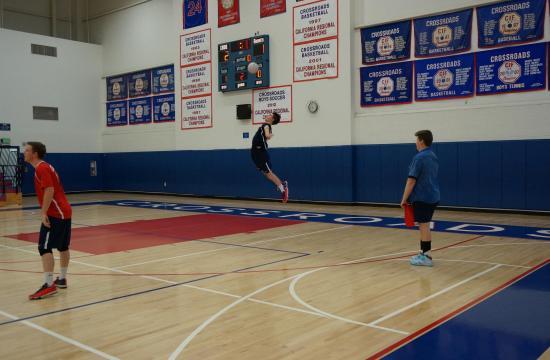 The Crossroads boys’ volleyball team went on a tear through the CIF Southern Section Division 3 playoffs, ripping off one big win after another. After finishing second in the Alpha League to Windward, the Roadrunners took their No.4 Division 3 rankings and roared through the postseason.

Unfortunately, that roar came to an end against South Pasadena High in the semifinals. Nevertheless, it was a good run for the Roadrunners. Riddled with illness and injury, the Roadrunners entered their final regular season game against Windward, the CIF’s No. 2 seed, a squad that got the better of Crossroads weeks earlier.

It was during this game that the culmination of talent, health and determination came together to prove how formidable the Crossroads squad really was. Crossroads sent Windward home with a 3-0 shutout that night to end the regular season.

In the quarterfinal round, Crossroads faced Rio Mesa where they managed another huge 3-1 win amid an encouraging crowd at home. That match wound up with the Roadrunners posting 25-12, 25-16, 25-23 set victories, while just dropping a close one.

Wednesday night, May 21, the Roadrunners met up with the defending CIF champions South Pasadena High School, the same team who ended the Roadrunners’ CIF campaign a year ago.  This semi-final game proved to be an explosive display of volleyball at the highest level.

The ball screaming through the air matched the intensity of the fans from both schools whose roars of encouragement resounded through the Crossroads Gym.

Nicholas Graves appeared to have wings, jumping to unreasonable heights throughout the game.  It was an awesome display of athleticism by both teams.  When the night was done, the Roadrunners, however, came up short of the win, going down in defeat, 16-25, 20-25, 25-17, 18-25.

Although the season came to an end, it was a remarkable ride for the Roadrunners.