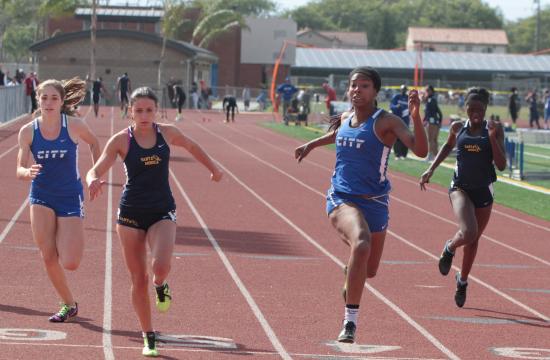 The Ocean League track and field championships were pretty much dead even after the competition ended on Thursday, May 9. And there were plenty of noteworthy performances from school and individuals representing Santa Monica and Westside Los Angeles.

Santa Monica sophomore sprinter Marcel Espinoza was the track athlete of the day with a blistering time of 10.83 seconds in the men’s 100-meter race. Not too far off his track was teammate Dejai Whittaker, who finished the race in a respectable 11.21 seconds. Whittaker also won the men’s long jump, going over the high jump bar at 6-4.

The 200-meter race went to Beverly Hills High sophomore Lucas Brito, who clocked an impressive 23.09 to win the league title. Samohi dominated the intermediate races with victories in the 800, 1,600 and 3,200m. The Vikings went 1-2 in the 800 with Justin Sardo claiming the top spot with a time of 2:00.95. Arden Lassallea, senior at Santa Monica, nipped at Sardo’s heels, coming in second in a swift time of 2:01.49.

Lassalle doubled up in the 1,600, winning that race with a time of 4:30.23. Samohi runners, paced by third place finisher Lucas Jackson, showed up strong, landing the 3-4-6 spots. The 3,200-meter race was pretty much the Santa Monica High Show as the Vikings placed runners in the top six spots. Senior Jahangir Habib clocked in at the finish line at 10: 09.05 to win the hotly contested race.

Samohi placed seven runners in the top 10 spots, with six ending the race less than 11 minutes. Clint Nicholson (10: 16.52) and Lucas Jackson (10:18.42) rounded out the top three spots in the race. Beverly Hills had an adequate showing in the hurdles races with junior Harold Green winning the top spot with a time of 17.34 seconds.

Neither Santa Monica no Beverly Hills did too well in the relays. Inglewood wound up winning the 4×100 relay, while Culver City claimed victory in the 4×400 race. Samohi’s Sumner Schwartz won first place in the men’s discus with a heave of 11 feet, six inches.

In the 1,600, Samohi had seven runners in the top 10. Sophomore Kasia Krzyzanowski led the way with wins in both races. Krzyzanowski ran across the finish line in the 1,600 in 5:32.49.