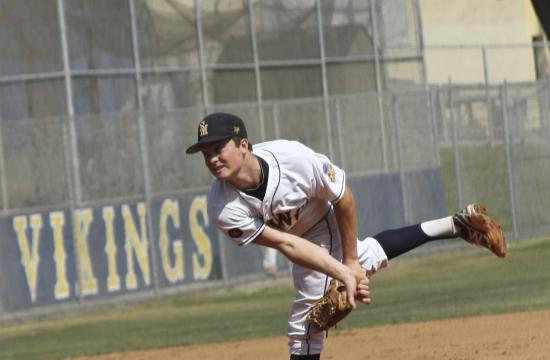 Alex Gironda finally has his no-hitter.

This is the second time Gironda has taken a no hit bid into the seventh inning his high school carrier. The first came last season against the rival Culver City High School Centaurs when a hit with one out in the inning broke up the no hitter.

“I felt like I had some unfinished business,” Gironda said of his previous no-hit bid.

The fourth-seeded Vikings (26-4) took control of the game early scoring all five runs in the first three innings.

Bulldog pitcher Alex Carrillo looked shaky in the first two frames allowing three hits and a walk. However, he did not receive help from his defense, which committed all three of its errors when Carrillo needed it most.

Carrillo settled down after the third inning and completed the game, allowing only two hits and a stolen base over his final three innings of work. However, the Bulldogs could not solve the Cal Poly SLO bound Gironda.

The only hiccups that kept Gironda from a bid at a perfect game was an error by third baseman Rudy Olmero and a hit batsman in the second inning.

The Bulldogs’ fate was sealed in the third inning, when Viking catcher Matt Kassowitz and first baseman Tommy Gutierrez hit back-to-back doubles to drive in the fifth run for the Vikings.

The Viking bench was not aware of the no-hit bid until the seventh and with the end so near, no one wanted to jinx it.

“In the seventh [Viking second baseman] Aakeem [Allahja] kept saying ‘lay out for stuff, lay out for stuff’ that was the sign he had a no hitter, but you don’t want to jinx it,” Viking center fielder Freddie Norris said.

Viking coach Kurt Schwengel was not surprised that Gironda was able to hold the Bulldogs hitless.

“He’s thrown that quality of a game-three or four times this year. I’m surprised it’s not his third or fourth no-hitter of the year, but to have a no hitter in the first round of the playoffs is pretty amazing,” Schwengel said.

After the game, the team was optimistic about its chances of reaching the Division III finals at Dodger Stadium.

“Where does the team go? Dodger Stadium,” Gironda said.

Gironda’s no hitter was one of four thrown in first round play Friday.

The Vikings will travel to Rolling Hills Estates to take on the Palos Verdes Peninsula High School Panthers Tuesday.