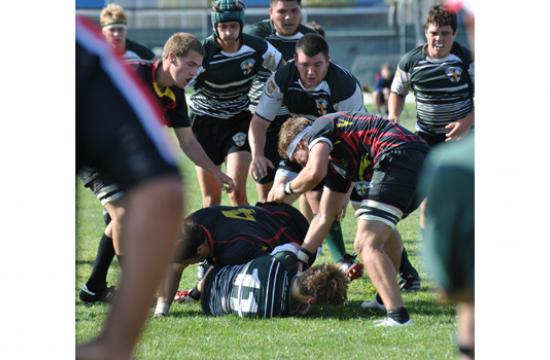 The rematch of last year’s championship final had all the exciting elements of high-caliber rugby, though with a different result from 2013.

First points went to the Dolphins after just three minutes when, following a powerful twenty-yard driving maul, center Cormac Heaney set up a third-phase where hooker Willy Hock popped the ball to No. 8 Conor Lydon who broke through two defenders to score a nice try under the posts. Alex Walsh made the conversion to put the Dolphins up 7-0.

The defending champion Mustangs kicked into gear immediately and pressured Santa Monica into adopting a hurried defense which soon proved ineffective. A loose Dolphin pass in desperation from a lineout ten yards from their goal-line was intercepted by speedy Mustangs flanker Jacob Neely who sprinted in for an easy score, which the Mustangs failed to convert.

The Mustangs showed adept ball handling skills as they terrorized Santa Monica at the breakdown and enjoyed the majority of first-half possession. After constant pressure and with Santa Monica living off scraps, Mustangs took control and from a well-placed cross kick chased hard by winger Harrison Cohen who scored out wide. The Mustangs again missed the conversion but were ahead 10-7.

Mustangs No. 8 Dean Karam scored another uncoverted try just before half-time and showed why they were they dominate youth rugby in the strong San Diego region. Behind 15-7, things looked grim for the Santa Monica lads going into the break and facing a stiff breeze in the second half.

Santa Monica was on the back foot from the restart and showed great determination, preventing the Mustangs from scoring as the San Diegans pounded their try line. The Dolphin defense was rock solid which resulted in the Mustangs becoming frustrated and undisciplined. With a man down from a yellow card just before the break, they could not afford to be complacent as they threw everything at their plucky challengers.

Suddenly the tables turned and Santa Monica were the more composed side, winning more ball from the set pieces and patiently awaiting to strike. Scrumhalf Evan Clark gave no quarter as he took a quick tap from a penalty, marching the Mustangs backwards into their own half.  From an ensuing scrum, flyhalf Walsh threw a beautiful dummy and with a neat swerve off his left foot he bobbed and weaved through the Mustangs defense to score a brilliant solo score near the corner flag. Walsh converted his try, leaving Santa Monica one point behind, 15-14.

The Mustangs became increasingly frustrated, continued to infringe, and received their second yellow card for taking Clark out in mid-air as he caught an up-and-under. Several pick-and-goes by the Dolphin forwards made good yardage upfield which foiled the Mustangs.  From a clever switch to the left-hand side, Dolphin hooker Willy Hock dived over to put Santa Monica in the lead. Another Walsh conversion and the scoreboard read 21-15.

Try as they might in the dying remaining minutes, Mustangs simply could not penetrate a tenacious defense as the game drew to a close.

Dolphin Coach Charlie Lydon was very complimentary of the Mustangs:  “They are a fabulous team and it was just Santa Monica’s day in a game that could have gone either way. The coaches are so proud of all our players today. To come back from 15-7 down in the second half into a breeze and without one of our key players, flanker Tom Heaney, and hold the opposition scoreless is an incredible achievement, but to do this against a team like Mustangs is just exceptional. We have fifteen seniors on this team and they dug deep in the second half to show how much they wanted to win against all the odds. We wish to thank Alexandra Williams, Executive Director of Southern California Youth Rugby, the match officials, and club volunteers for organizing a great day of rugby at Cal State Long Beach.”

Both the Dolphins and the Mustangs will travel to Elkhart, Indiana, this week to participate in the Boys High School National Invitational Tournament.