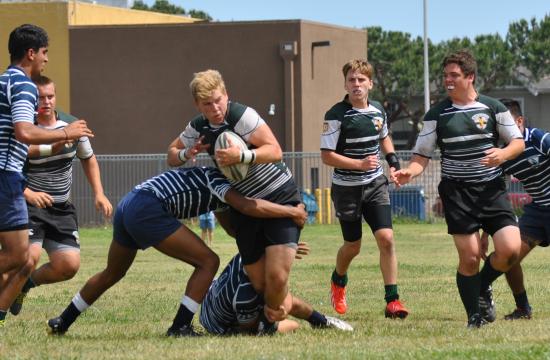 The Back Bay Sharks came to Santa Monica’s home field for the SCYR semifinal where the Dolphins proved victorious, 29-5. Santa Monica advances to the SCYR Championship where they face the San Diego Mustangs in a rematch of last season’s final.

The semifinal started with a bang, and quick rucking by props Benny Gonda and Riley Lynch saw Santa Monica go deep into Back Bay territory. Back Bay’s excellent defense forced a turnover and counter attack.

Then a great tackle by flanker Tom Heaney allowed Santa Monica to recover possession as hooker Willy Hock was first in support to poach the ball and bulldozed his way forward to earn Santa Monica a scrum right of the posts and 15 meters out.

From a solid scrum, No.8 Conor Lydon spotted a gaping hole and forced his way over the Back Bay line for a five pointer after five minutes.

Moments later scrumhalf Evan Clark took a quick tap after a Back Bay infringement and fullback Olan Moon-White threw a sweet pass down the left flank for winger Nate Peterson to score a classic winger try in the corner.

Back Bay came back fighting but could not capitalize on scoring opportunities as pressure from the Dolphins forced several dropped passes in their backline.

Excellent runs from Santa Monica locks Ian Jost and Adam Hernando brought the Dolphins back into the Sharks’ half. Then at 16 minutes, after a good scrum and quick ruck, fly-half Alex Walsh danced and weaved 30 yards to score a brilliant solo try.

At 15-0 Santa Monica were in control but needed to use their full defensive resources for the latter portion of the first half as Back Bay pushed and probed but failed to score.

Credit goes to the Santa Monica backrow of Lydon, Tom Heaney, and Oscar OckoMichalak and centers Cormac Heaney and Parker Lynch for their ferocious tackling to keep Back Bay scoreless at halftime.

Five minutes after the second half commenced, after a series of effective rucks kept Back Bay deep in their end, Hock showed a tenacious fighting spirit as he burrowed his way over for another Dolphin try.

Constant infringements caused the game to stutter into a game of chess, moving back and forth from one side of the field to the other when finally Dolphin center Parker Lynch broke through and scored after a great run by prop John DeWig.

Credit to the Back Bay players who refused to surrender and scored a try in the dying seconds of the game.

The match was played in a good spirit by both teams throughout and special mention should go to Santa Monica’s center Cormac Heaney for his excellent passing and effective tackling and support play.

By mirrormmg May 5, 2014
in Sports
Related Posts