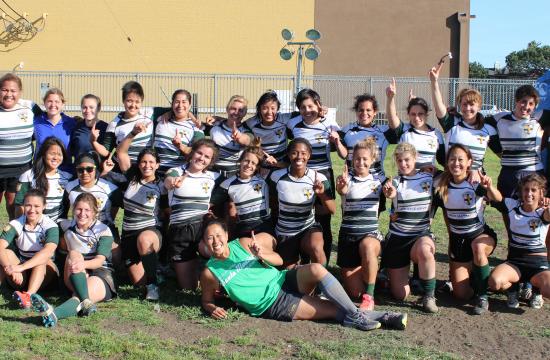 The Santa Monica Rugby Club Women defeated both the San Diego Surfers and Tempe Women on Saturday, April 26 to claim the SoCal Rugby Football Union Division I title and berth to the the USA Rugby National Quarterfinals in Dallas, TX.

With the number one seed going into playoffs, Santa Monica faced the San Diego Surfers for their qualifying match.

The Surfers came ready to fight and struck first with a penalty kick in the first five minutes, putting them up 0-3. Santa Monica answered quickly with a try by Whitney Vance, and the conversion by Jacki Bercovici was good (7-3).

The momentum ping ponged once again and resulted in another Surfers try, putting them up 7-8.

Halfway through the first half, a penalty try was awarded to Santa Monica for Nina Crane, high tackled on her way into the try zone. Bercovici’s conversion was good and the half closed with the ‘Phins up 14-8.

In the second half, Santa Monica came out swinging, scoring 3 tries within 15 minutes by Sarah Harris, Tia Blythe, and Grace Koplow (one conversion good by Bercovici), bringing the score to 31-8. The Surfers put one more on the board (conversion good) to bring the final score to 31-15.

Tempe played a hard fought game against Belmont to claim their spot in the championship game. By this time, the wind had picked up considerably and would play a factor in the game.

The championship game began with Tempe coming out and immediately utilizing their speedy backs, notching a try just 3 minutes into the game. The conversion was good, bringing the score to 0-7.

Tempe continued its march and scored once more (conversion good) and was up 0-14 at 15 minutes. Santa Monica finally answered with a try by scrumhalf and captain Emily Birdwhistell, capitalizing on a penalty by the try line. The conversion by Bercovici was good and the half closed with a score of 7-14.

The second half was a gritty, defensive battle with the wind affecting passes and kicking up dirt storms mid-play.

Still down by a try, Santa Monica finally had an opportunity to get the ball to wing Hannah Han with less than 5 minutes left. Han used her tremendous speed to blaze by the Tempe defense and bring the score to 12-14. As everyone held their breath, Bercovici notched the game tying conversion and brought the score to 14-14.

With 2 minutes left, the ‘Phins received the ball and were able to get it into the hands of wing Becky Hearn, who snuck by the last two defenders to score a try with no time on the clock. The game closed with tears and celebration by Santa Monica with a final score of 19-14.

Santa Monica travels to Dallas in the coming weeks to represent Southern California and looks to cap this landmark season with further success at a national level.

By mirrormmg May 5, 2014
in Sports
Related Posts