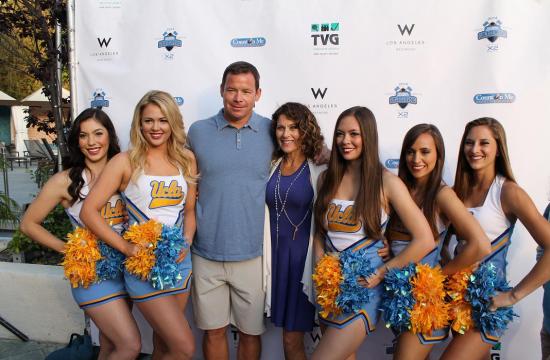 The stars lined up to come out and support UCLA football coach Jim Mora Jr. Mora and wife, Shannon Mora, teamed to come up with a non-profit organization called the Count on Me Foundation, which serves and benefits disadvantaged and at-risk youths.

And for the past seven years, Jim and Shannon have held their annual fundraising cue that will with the foundation’s aspirations. The main event is called the Jim Mora Celebrity Golf Classic, which both part networking, taking in some swings on the golf course, and at the same time, making more people aware of what the Count On Me Foundation is trying to do in the lives of young people everyday.

The Count On Me Foundation has raised more than $1 million in its existence. With this year being the eighth year of the Jim Mora Celebrity Golf Classic, the cause  has certainly not been lost with fellow UCLA alum and well-wishers. The 2014 Jim Mora Celebrity Golf Classic was held in two-days. The first part of the annual showcase was Sunday, May 18.

That part of the event was a more festive gathering with a more more formal introduction of what the charity cause was for. Former UCLA football standouts such as DeShaun Foster (running back), Kermit Alexander, Pro Football Hall of Fame lineman Jonathan Ogden and ex-basketball star Jason Kapono, were all part of the festivities.

There were other stars mingling about the W Backyard Bar & Restaurant of the W Hotel in Westwood, near the UCLA campus. The second part of the two-day event was, of course, the golf tournament, which was played at the Riviera Country Club.