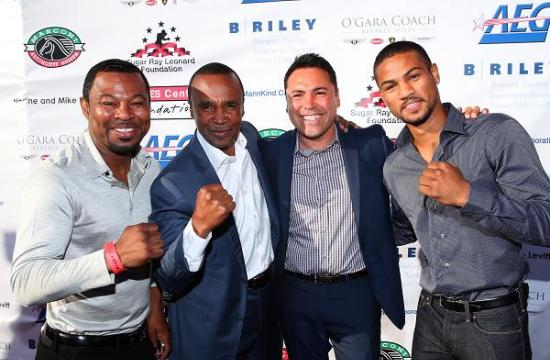 B. Riley & Co. and the Sugar Ray Leonard Foundation co-hosted on May 20 the 5th Annual “Big Fighters, Big Cause” Charity Boxing Night at the Santa Monica Pier, which benefited the Foundation’s mission to raise funds for research and awareness towards a cure for Juvenile Diabetes.

“The Voice” Season 6 winning-coach Usher and legendary boxers including Mike Tyson, Oscar de la Hoya, Shane Mosley, Thomas Hearns, and more gathered at the world-renowned pier to show their support for the cause.

The evening included a three-bout PROAM fight card commissioned by the California State Athletic Commission and USA Boxing, as well as a live auction and silent auction.

Just after winning his first coaching victory on “The Voice,” Usher drove straight to the event at the Santa Monica Pier on his Ducati motorcycle to join Sugar Ray Leonard. Usher will be playing Sugar Ray Leonard in the Roberto Duran biopic “Hands of Stone.”