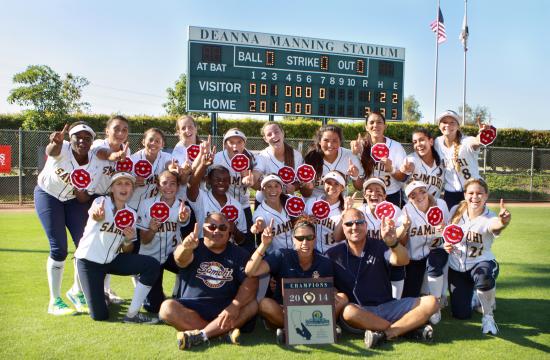 The Santa Monica High School’s softball team took home the CIF Division 4 Championship title on May 31. With a team of 17 girls, the accomplishment was no easy feat.

For Coach Debbie Skaggs, the end of the season was very telling of the team’s mindset as a whole.

“It’s how you finish, not just how you start,” Skaggs said.

The coach explained that she made “preseason as tough as possible,” partially in order to ensure that the team would be well prepared for the finish.

The journey toward the CIF championship was not exactly unexpected, as the Samohi softball team made its way to CIF finals last year as well. However, it was a “bit of a struggle” – as with any sports team – trying to “get all 17 girls on the same page.”

One of the most essential tasks of being a team member is being aware of which position each player best thrives.

“We spent time trying to figure out each player’s individual role and identity on the team,” Skaggs said. “It took a lot, but we worked together.”

Skaggs cites the team’s quarter-finals against Heritage High School as one of the most memorable moments of the season – not only because they won a challenging game, but because they never stopped trying. The girls ended up scoring three runs in the sixth inning despite a less-than-stellar start.

“They kept talking and communicating with each other on the field and rooting for each other,” Skaggs said. “The fact that they never gave up and strung together is [something I’m proud of].”

The Samohi softball team has won every game in the Ocean League for the past 11 seasons.

This 2014 CIF title makes it their second win in a span of five years, with their last victory in 2010. The team has made back-to-back appearances at the CIF championships.

With an overall standing of 25-8 in the Ocean League, the team clearly has a promising future ahead of them.

And with the end of this academic high school year, Coach Skaggs concluded her 27th year coaching softball at Samohi.

As a former softball player herself, she explains that one of her favorite parts of being a coach remains probably the same as many of her players – the “game management” and the love of the game.