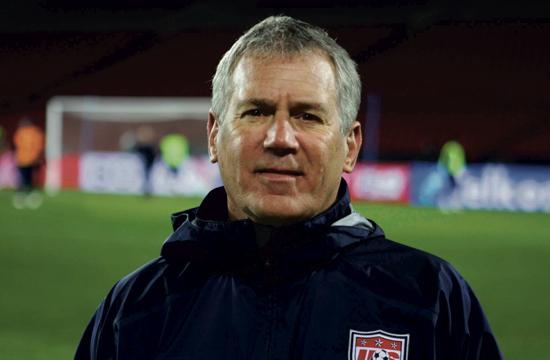 What with the imminent chaos and excitement due to occur all over the globe in lieu of the World Cup, it is important to keep in mind those who keep the exciting games afloat, particularly those who are responsible for maintaining and rejuvenating the health and physical conditions of the athletes.

Santa Monica-based doctor, orthopedic surgeon, and researcher Bert Mandelbaum is the team physician for the U.S. Men’s World Cup Soccer Team and is working with FIFA this year at the 2014 World Cup as the Medical Director.

Among several other accomplishments and titles – such as serving as the team physician for LA Galaxy, the Director of Research for the MLB, and the Chief Medical Officer for the 2015 World Special Olympics – Mandelbaum has worked with the national soccer team since 1991 and has participated in five World Cups in the process.

As the creator of a program that aids in preventing and reducing ACL tears in female soccer players (PEP – prevent injury, enhance performance), Mandelbaum stands as an expert in sports medicine and has devoted his life to emphasizing physical well-being. PEP is a program that is starting to be implemented in other sports as well, and requires no training for coaches to teach.

To say the very least, Mandelbaum is a significant asset to the world of sports and surely provides a reliable sense of comfort and relief during an event that can often be too hectic and rowdy.

“There are so many different parts of my job,” Mandelbaum said. He also cites this reason as to why he enjoys his job so tremendously.

“I take care of everyone from young athletes to World Cup athletes, perform surgeries, take part in research and innovation, and educate others,” he said.

Mandelbaum has also served as the head orthopedic physician for college athletes at Pepperdine University and Santa Monica College.

The list goes on, but his multi-functional occupation seems fitting for such an expert as Dr. Mandelbaum.

For this doctor, sports have been “the beginning and the end.” He coached lacrosse and attended medical school; subsequently, “coaching and doctoring athletes is all [he has] ever known.”

“It has been an amazing journey,” Mandelbaum said.

He has participated in the World Cup with the men’s soccer team in 1994, 1998, 2002, 2006, and 2007, as well as with the women’s World Cup in 1999 and 2003. From finding themselves in the middle of the Russian Coupe to planning how to exchange gifts with the Iranian team, Mandelbaum seems to have a plethora of memorable accounts, especially those regarding the beauty of intercultural communication.

Through his professional career, it has become clearer to him how the “life of sports and sports of life are inextricably linked.”

Mandelbaum has an upcoming book that further elaborates on this concept of physical activity as a lifestyle and the idea that humans are “genetically hard wired” to be active beings and take part in the survival of the fittest.

“The Win Within: Capturing Your Victorious Spirit” is set to be published in September.

Naturally, Mandelbaum is in Brazil at the moment, having been preparing for the games that commenced on Thursday. As a man who witnesses all angles of the World Cup, including the rare sight of a completely barren field, he described the serenity of the empty stadium prior to the games as “the calm before the storm.”

This peaceful scene is surely an experience to savor for Mandelbaum, who says that the most challenging part of his job is that “there are only 24 hours in a day.” Having worked with thousands and thousands of athletes thus far, Mandelbaum inevitably leads a busy lifestyle, one that can perhaps be likened to the hustle and bustle of the upcoming World Cup.