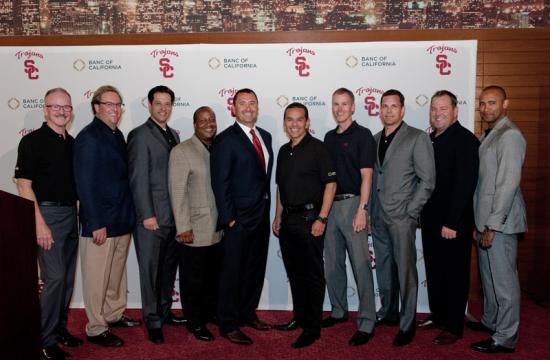 Banc of California, Inc. has announced a focus on financial literacy in cooperation with the University of Southern California (USC) Athletics department as the company was named the “Official Bank of USC Athletics.”

To launch the relationship, Banc of California employees and USC Athletics staff hosted a Trojan’s Kid Corner event at Brittingham Field on the USC campus which engaged more than 100 children from USC partner programs with financial literacy classes, pep talks and sports workstations with USC coaches, as well as the announcement of a 20,000-ticket giveaway to low-income students in the neighborhoods surrounding the campus.

“At USC, we are pleased to partner with a company like Banc of California, that places a significant value on giving back to the communities it serves,” said Pat Haden, USC Athletic Director. “By teaming with Banc of California employees, we will be working together to improve financial literacy for thousands of young people.”

A 2008 National Foundation for Credit Counseling, Financial Literacy Survey found that only 34 percent of parents have taught their teenagers how to balance a check book and even fewer have discussed how credit card interest and fees work.

The same survey found only 59 percent of millennials say they pay their bills on time every month and that three out of four Americans say they are not saving enough.

“We are happy to give away 20,000 tickets to deserving members of the community. To ensure that we are truly helping community members, each ticket will come with a workbook on Financial Literacy,” said Eric Holoman, a member of Banc of California’s Board of Directors and President of Magic Johnson Enterprises. “As a USC graduate, I am pleased to bring together my alma mater and Banc of California to enhance financial literacy in communities surrounding USC.”

“We are excited to add USC to our strong network of community partners,” said Sugarman. “By working together, we look to broaden our efforts in reaching out to all communities in need while at the same time, providing our employees with new opportunities to volunteer and to also enjoy USC Athletics. Additionally, this is an important opportunity for Banc of California to tap into the phenomenal USC alumni network as we look to grow our customer base throughout Southern California.”

“We are delighted to partner with a strong, community oriented company like Banc of California,” said Sarkisian. “At USC, we know what it takes to build excellence. It is about winning, but it is also about building strong leaders, educating and giving back to the community. These are values we share with Banc of California.”