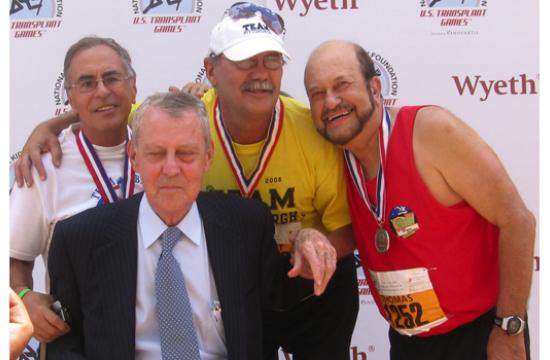 As one of 26 organ recipients and donors representing Team SoCal, Santa Monica Mirror columnist Tom Elias will compete in swimming and track at the bi-annual Transplant Games of America in Houston, TX, from July 11-14.

At the last Games, Elias took silver in the 50-yard breaststroke and bronze in the long jump. This is his ninth Transplant Games. He first participated in 1998, just nine months after his transplant.

Elias’ usual fitness routine is to work out at the gym – usually 60 to 90 minutes every day – weights, cardio, and stretching.

Starting six months before the Games, he runs at the Santa Monica College track one to three days/week – practicing long jumps, wind sprints (100 and 200 meters), and interval training.

He had been diagnosed with polycystic kidney disease in 1989 and had tried every kind of diet in hope of controlling the symptoms to avoid further kidney deterioration and possible dialysis and/or transplant.

But, several years later, he went into kidney failure and was put on the kidney transplant list while on dialysis.

He updated everyone in his circle about his condition (but never asked for a kidney) and 14 relatives and friends came forward and offered to be a living donor for him, including his rabbi, the rabbi’s wife, and the cantor from his synagogue.

“This was the most touching thing in my life – that 14 people cared enough about me to give up a kidney,” Elias said

His wife and son were not a blood type match, and neither was his first cousin.

But, his first cousin’s daughter was and she donated her kidney.

She has since had two children – “a testament to the process,” comments Elias.

“You never stop being grateful,” he said. “My transplant experience has been fabulous.  Most people who know me have no idea.”

About the Transplant Games, Elias observes that part of its appeal is being with people who have been through a similar experience.

“Your own people understand things about you that the rest of the world cannot and never will – that’s the most important aspect of the Games for me,” he said. “I find my teammates on Team SoCal to be the most determined, yet pleasant and exciting, group of people I have ever been around. It was an inspiration to learn what some of my teammates have come through and to see how optimistic and forward-looking they all are.”