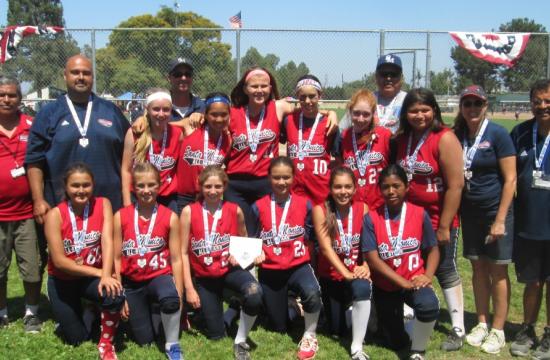 The 16U Santa Monica Patriots placed first in their District championship three weeks ago in Downey. Last week they placed 5th in the State tournament in Lancaster.

This earned them a spot in the ASA Western National Softball Tournament to be held in Gillette, Wyoming from July 30 to Aug. 3.

“This is an amazing group of young ladies,” said the team’s head coach Antonio Temblador Jr. “I had the honor of coaching five of these players a few years ago when they were a 12U Santa Monica team, and they went all the way to Nationals that year too, finishing 9th out of 49 teams in the National competition. Watching this group come together and accomplish what they have speaks volumes about their dedication, work ethic, character, and love for the sport.”

In addition, the current Santa Monica 12U Gold All-Star team finished third in their District championship and then fought their way through the State tournament in Lancaster.

This earned them a spot in their Western National Championship to be held outside of Sacramento starting July 28. The head coach of the 12U Gold All-Star team is Jared Breuer, long-time coach and current president of the Santa Monica Girls Fastpitch League.

Both Santa Monica teams are looking for sponsors, so if a company would like to donate to help support the teams’ journeys to Nationals, go to the Santa Monica Girls Fastpitch website at www.santamonicagirlssoftball.org.

Santa Monica Girls Fastpitch is a non-profit, all girls softball league for ages 4 to 14 serving Santa Monica and the Westside for more than 30 years.