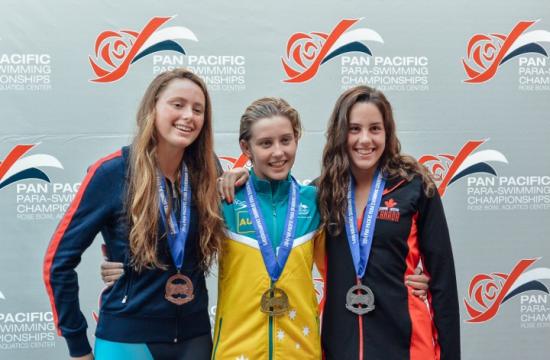 King was born with the nerve injury brachial plexis and was one of the 45 highly commendable, Paralympic-eligible swimmers on Team USA to take part in this selective swim competition.

Coincidentally, King previously stated that she considers backstroke as her favorite swimming style out of the four strokes. Not only did she thoroughly enjoy the 100-meter backstroke event, she earned a gleaming bronze medal in the process.

“I feel amazing,” King said. “I’m really happy and honored to have been able to place.”

King has years of experience and an impressive swim record under her belt, but she maintains a humble outlook on competition.

“All of the other girls were such fast swimmers,” King said. “I’m especially glad to even be a contender.”

When it came to the motivation behind her swims, there were a couple of personal main sources of energy and inspiration. Aside from her parents, who King referred to as her greatest supporters, her club teammates, who all swim under Coach Octavia Alesi as a training group, acted as a potent support system.

“A lot of my teammates came out to support me,” King said. “It definitely helped me to swim faster, knowing that they were all watching.”

In this year’s Pan-Pac, King participated under the S10 classifications, which groups the athletes with the least disability. Her top performance times at the 2013 Spring Paralympic Swimming National Championships in March were what qualified her for the Pan-Pac Championships.

The Pan-Pac Championships took place on Aug. 6-10 at the Rose Bowl Aquatics Center in Pasadena.