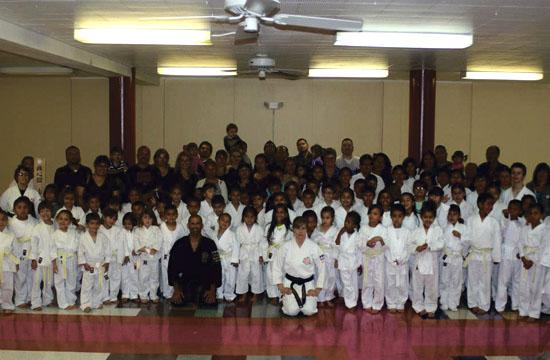 In 2009, a Santa Monica-based School of Martial Arts branched out to form a Foundation to teach a free weekly class to a handful of at-risk youth in South Central Los Angeles. Fast-forward to today, the program has significantly grown to multiple free classes that serve about 200 students a week who live in South Central.

It all began soon after Stacy TenHouten began working for Renshinkan California in Santa Monica in 2008, which is owned by William Candelario, who has a more than 30-year martial arts career.

TenHouten took on a job at the dojo (a room or hall in which karate and other martial arts are practiced) as a Program Director after seeing great results from her daughter who had been attending classes for about year.

“She started to speak to people a lot more,” TenHouten said. “She was able to demonstrate in front of a class. As a parent I would sit and watch the classes and I could see that William was able to help kids with different personalities develop confidence, and strengthen their weaknesses. I thought it was amazing. Kids that were shy built self-esteem, kids that had discipline issues became more respectful, and kids that were all over the place became peaceful.”

A casual conversation between TenHouten and Candelario about her daughter’s transformation turned into a mutual revelation for both of them.

TenHouten said she also grew up under difficult circumstances. She imagined what an influence like Candelario would have had on her as a child. She said it was imperative for them to get similar help to at-risk children.

The pair immediately got to work and co-founded the Renshinkan Foundation of California, which soon began offering classes to children who lived in South Central.

Through donations and fundraising efforts of the students at the Santa Monica dojo, the South Central program has blossomed – the pair have even received several awards and recognition for their work with at-risk youth.

Located on the second floor of a design building in downtown Los Angeles, parents sit on a carpeted section that surrounds the hardwood center where their children practice Renshinkan Karate.

The children shout in unison at the direction of their sensei, William Candelario, who is a Puerto Rican native who moved to Los Angeles in 2007 after being denied the opportunity to compete at the Olympic level, despite having qualified.

After that he wanted to do more.

“This is a dream that I’ve had for a long time,” Candelario said.

This – his dream – is a free traveling dojo for underserved children in South Central.

What was initially a small effort to bring martial arts to children has blossomed into an organization that serves more than 200 children per week.

Founded in the summer of 2009, the Renshinkan Foundation of California continues to educate and expose children to martial arts and Japanese culture.

Candelario and assistant instructor Kara Barthel teach children every Wednesday from 9 am to 6 pm without much time in between for breaks.

He grew up in the projects of Puerto Rico in what he described as “hard neighborhoods.”

The five-year-old Candelario was instantly enthralled by the austere manner of his sensei, Adalberto Rosario Morales.

The discipline he experienced in the dojo, paired with his parents’ keen eye saved his life.

Assistant sensei Barthel has witnessed the effect karate has had on her students.

“A lot more are willing to talk and be playful,” Barthel said. “They tell me about their grades in school and that they’re getting their work done before class.”

“Within weeks,” Candelario said, “we were getting calls from people who wanted to support the organization. People would say, because you don’t charge the kids can use my space for free.”

The current space, he said, is perfect. “It’s like a dojo,” he said.

The Foundation is solely supported by donations and fundraising.

TenHouten said operating the organization had its challenges.

“We are not an established non-profit organization,” she said. “These classes have been run completely at our own expense and donation of time. Financially, it’s very difficult. We reach out to schools in the area. We need donations for everything.”

“Everything” now includes, among other items, passport fees for the Foundations’ green belts who hope to compete in the 2015 Shorinji-ryu Renshinkan Karate Do International Friendship Tournament in Taiwan.

“The kids don’t really know because we’re trying not to talk about it too much. We don’t want to get their hopes up,” TenHouten said.

Jenny Moran, one of the parents based in South Central, has taken on the fundraising lead among fellow parents.

“Instead of presents for birthdays or Christmas,” Moran said, “We’re asking parents to give children money in envelopes for fundraising. Every dollar counts. No matter what we have to do, we are going to Taiwan!”

Fundraising won’t stop there. Moran said her brother will use his mobile car wash to help the children generate funds for their trip to Taiwan.

Candelario bemoans the commercial form karate has taken in America, and for that reason is thrilled for the children to experience the purity of their craft.

“They will experience the origin – back to the source,” he said.

Candelario’s message for his children isn’t about escaping the cities they are from, the places they call home. Instead, he said, through discipline, commitment, self-respect, and determination the children will learn the tools to enhance the positive aspects of their cities.

“The site of struggle is really beautiful,” he said. “I don’t think they need to escape from South Central. They can make South Central better.”

To help the children of Renshinkan California cover their travel expenses in addition to passport fees for their trip to Taiwan, contact Stacy TenHouten at 310.259.6716 or visit their website www.renshinkanfoundationofca.com.