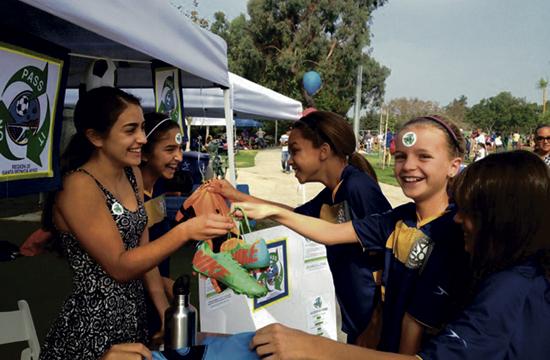 As a program that seeks to collect and recycle donated soccer uniforms, cleats, and equipment, Pass it On provides an opportunity for AYSO 20 families to give away any unwanted soccer uniforms, while those in need of such items can ultimately have their pick among the donations.

“We believe this is a great way to affirm our commitment to preserving the environment while at the same time, assist soccer players whose families might not have the means to purchase new items,” Pass it On chair Emily Stoughton said.

Pass it On offered donation opportunities twice this year: at opening day in September and during Santa Monica AYSO’s annual Picnic in the Park this past Sunday, Oct. 12.

Although this is a newly launched initiative, Pass it On acquired a hefty amount of soccer equipment, including approximately 300 pairs of cleats, 100 pairs of shin guards, 50 soccer balls, and uniforms enough for eight teams.

“Next year, we expect the donations to grow as more people will be aware that [Pass it On] exists,” Stoughton said.

The bulk of the athletic items will be donated to after-school program America Scores LA, a “great organization that works with low-income kids” in the Palms area, where there is a disparity of youth centers, parks, and other similar resources for children.

America Scores LA focuses on strengthening academics, creativity, and leadership among urban youth by encouraging them to write poetry and play soccer.

The organizers behind Pass it On hope to see a lasting tradition within the surrounding community.

“My family has been working to get this initiative started so that it becomes a routine effort in the years to come,” Stoughton said.