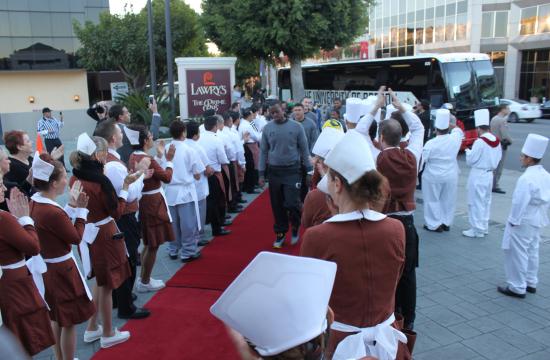 The Florida State football team is scheduled to participate in the Beef Bowl today at Lawry’s The Prime Rib in Beverly Hills, one day after its opponent in Thursday’s 101st Rose Bowl Game, Oregon.

While the Seminoles will be playing in their first Rose Bowl Game, it will be participating in its second Beef Bowl event.

When Florida State was preparing for the final Bowl Championship Series National Championship Game in January, Lawry’s hosted a special championship Beef Bowl event for the Seminoles and Auburn in Newport Beach.

Offensive lineman Jake Fisher was dressed in a chef’s outfit and cut a slice of prime rib. He said he hopes to own a restaurant someday.

The Beef Bowl began in 1956 and is older than all but the Rose, Orange, Cotton, Sugar and Sun bowls. It was called “the best tradition” of the college football bowl season by The Sporting News in 2005.

“The purpose of the event is to honor champion student-athletes for their achievement as a team of making it to the Rose Bowl Game,” Frank said. “The meal is a large part of the celebration because these are young men with enormous appetites, but it’s more about celebrating together away from the practice field in a legendary setting.”

From 1963-69, a publicity firm touted the Lawry’s Beef Bowl events like they were beef eating contests. Lawry’s changed the name of the event to “Lawry’s Beef Scrimmage” from 1970-72 in an attempt to dissuade the players from approaching the event like it was a prime rib eating competition.

The amount of beef consumed by each team is determined by multiplying the number of prime rib roasts consumed by the average weight of a roast, according to Todd Erickson, author of the 2005 book, “Road to the Rose Bowl,” which explores the Rose Bowl Game and the tradition of Lawry’s Beef Bowl through players’ and coaches’ recollections.