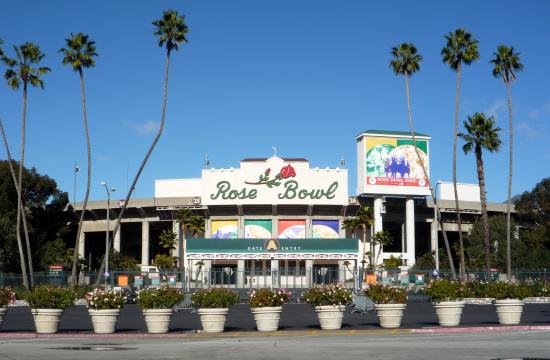 The Florida State and Oregon football teams are scheduled to arrive in Southern California Saturday to begin five days of activities leading up to Thursday’s 101st Rose Bowl Game, which will also be the first College Football Playoff Semifinal.

The teams are scheduled to visit Disney California Adventure Park Saturday. Oregon is scheduled to participate in the so-called Beef Bowl at Lawry’s The Prime Rib in Beverly Hills on Sunday, one day before Florida State.

The game’s matchup was determined by the final rankings of the College Football Playoff Selection Committee, which ranked Oregon second and Florida State third.

Alabama was ranked first and Ohio State fourth and will meet Thursday in the Sugar Bowl, the other semifinal game in the first year of the four-team playoff.

The semifinal winners will advance to the College Football Playoff National Championship, which will be played Jan. 12 at AT&T Stadium in Arlington, Texas.

The Rose Bowl and the five other participating bowls — the Sugar Bowl, Orange Bowl, Fiesta Bowl, Cotton Bowl and Peach Bowl — will be the site of a semifinal game once every three years. During the years it does not host a semifinal, the Rose Bowl Game will have its traditional Pacific-12-Big Ten matchup.