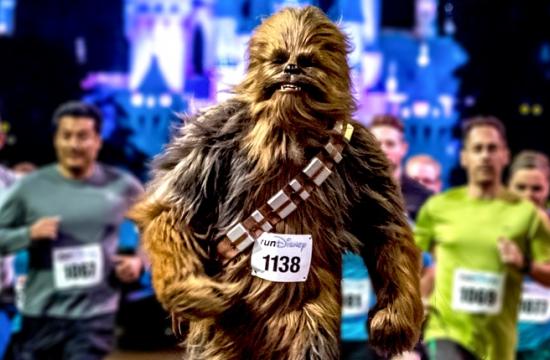 Jennifer Berry of Denver was the women’s winner of today’s inaugural Star Wars Half Marathon at the Disneyland Resort, setting a personal record, while former Fountain Valley resident Nick Arciniaga was the men’s winner.

The 34-year-old Berry completed the 13.1-mile course in one hour, 22 minutes, 34 seconds for her third victory in a runDisney race since Aug. 31. Carla McAlister of San Clemente was second in 1:25:32 and Kellie Nickerson of Albuquerque, New Mexico third in 1:27:03.

Berry said her victories in the Disneyland Half Marathon on Aug. 31 and the Disney Wine & Dine Half Marathon Nov. 8 at the Walt Disney World Resort near Orlando, Florida prompted her to “come out and try to round out a third” victory.

The 31-year-old Arciniaga was timed in 1:08:13. He was greeted by Mickey Mouse, Minnie Mouse, Donald Duck and Goofy dressed as their favorite “Star Wars” characters as he crossed the finish line near the Disneyland Hotel.

“It was pretty big for me,” said Arciniaga, who now lives in Flagstaff, Arizona. “It’s a hometown race for me so I like coming back to Southern California and having my local fans and my family come out and cheer me on, so coming out here and being able to win is something that’s always pretty special to me.”

Arciniaga said he visited Disneyland once a year when he was growing up, “so it was pretty exciting to run through the park.

“Running backstage is still pretty new to me and running through all the lands that I knew was pretty exciting,” said Arciniaga, the men’s winner in the 2014 Disneyland Half Marathon and seventh among men in the 2014 Boston Marathon.

A capacity field of 12,200 registered for the race, including runners from all 50 states, the District of Columbia, Puerto Rico, Guam and 16 foreign countries. The race reached its capacity in 122 minutes, according to an official with runDisney, which holds a series of races at the Disneyland Resort and the Walt Disney World Resort.

The “Star Wars Rebel Challenge,” entry for both the half-marathon and Saturday’s Star Wars 10K, reached its capacity in 24 minutes.

The course began on Disneyland Drive, near Downtown Disney and Disneyland, then went through Disneyland and Disney’s California Adventure Park. The field then moved to the streets of Anaheim, passing the Anaheim Convention Center and headed south on Harbor Boulevard to Garden Grove Boulevard.

There were costumed characters from “Star Wars” and Disneyland characters along the course to cheer the runners on.