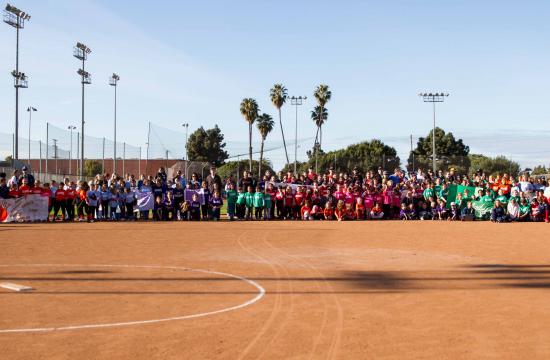 The 10U Santa Monica Gold team (comprised of 9- and 10-year-old girls) won their District tournament over the summer, beating out 14 other girls softball teams to take home the coveted first prize (they won all five games and out-scored their opponents 41-4).

One of those teams, the 12U Santa Monica Gold team, placed fifth in the National competition (of 43 of the best softball teams across multiple states — more than a thousand teams originally competing in their division). The 16U Santa Monica Patriots then won their National Championship, scoring wins over the best teams in California, Colorado, and Wyoming to get there.

The success that SMGF has enjoyed is due in large part to some very dedicated volunteers.

SMGF is a non-profit, 100 percent volunteer league with a Board of Directors, coaching staff and countless other volunteers made up of parents, former softball parents and even grandparents of players.  They do it for the love of the game, not for a paycheck, and for the bonding experience each of them shares with their daughters. Everyone pitches in, and the girls all benefit.

“My family joined this League nine years ago, when my oldest daughter was just six years old,” said Jared Breuer, current SMGF president. “She has since played for Santa Monica High School, and I could not be more proud.  My youngest daughter is 12 and has played in the League for seven years.  Softball is such an incredibly fun sport for girls, teaching them to work together as a team, to be tough and persevere, and support each other. My daughters have met some of their best friends playing softball. This League has brought a lot of joy to our family, which is a big part of why each member of our family gives back to the League.”

Next up for SMGF is a unique partnership with the powerhouse UCLA softball team.

This season-long partnership kicks off with a Saturday clinic on Jan. 24, available to girls registered to play softball with SMGF this coming Spring.  UCLA coaching staff and players will teach Santa Monica girls the fundamentals of the game.

“The League is incredibly lucky to be forging this partnership with such a legendary softball program as the UCLA Bruins,” said Breuer. “We’ve gone as a League to watch the Bruins play, and they are incredibly talented.  Seeing the look on an 8-year-old softball player’s face when she realizes the possibilities in this sport is truly priceless. We are so grateful to UCLA softball head coach Kelly Inouye-Perez and her incredible staff and players for making this partnership possible.”

The good news: it’s not too late to register your daughter for a fun-filled season of softball this Spring.

Go to www.SantaMonicaGirlsSoftball.org to register and learn more about the UCLA softball clinic as well as the many other softball activities available this year, including the Jr. umpire program and upper division “Select” opportunities.

Registration is currently open for all divisions, for girls aged 4 to 14. Participants do not have to live in Santa Monica to play for SMGF — girls from the San Fernando Valley down to Hawthorne and beyond play in the League.

All you have to have is a desire to teach your daughter a new skill in a fun and supportive environment where she may just make her best friends for life.

Santa Monica Girls Fastpitch (SMGF) is a non-profit, all girls softball league for ages 4 to 14 serving Santa Monica and the Westside for more than 30 years.