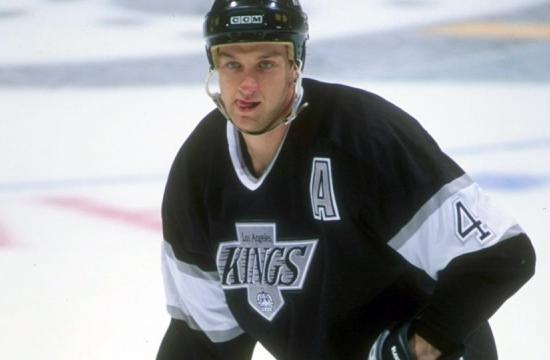 The Los Angeles Kings will retire the No. 4 jersey worn by Rob Blake before Saturday’s game against the Anaheim Ducks in connection with his selection to the Hockey Hall of Fame.

Blake’s white jersey from the “silver and black” era will hang from the rafters at Staples Center. He will be the sixth player to have his jersey retired by the Kings, joining Marcel Dionne, Wayne Gretzky, Luc Robitaille, Dave Taylor and Rogie Vachon.

The team is encouraging fans to be in their seats no later than 6:30 p.m. The ceremony will be broadcast live on Fox Sports West and KABC-AM (790).

Blake was selected by the Kings in the fourth round of the 1988 entry draft. He played 14 of his 20 NHL seasons with the Kings and holds the team records for games, goals, assists and points by a defenseman. In 1998, he became the only King to receive the Norris Trophy as the NHL’s top defenseman.

Blake was inducted into the Hockey Hall of Fame in November. He is now a Kings vice president/assistant general manager.

One donor will be selected to receive four upper-level tickets for the Jan. 28 game against the Chicago Blackhawks.

Drives will also be held before the games on Monday and Jan. 28.