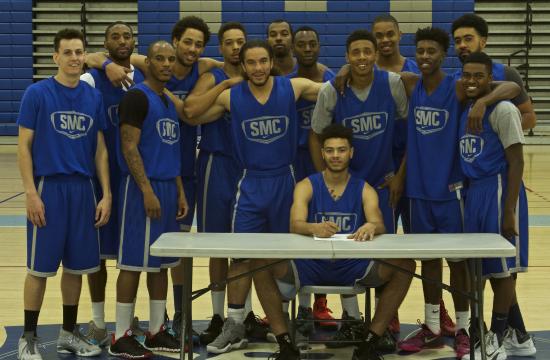 King will be the first Corsair player to take part in the Pac 12 conference.

It’s a big step for the SMC Men’s Basketball program, according to head coach Jerome Jenkins.

“We’re putting kids at the next level each and every year,” Jenkins said. “It’s an exciting time for our program and we’re very excited for Derrien.”

King, 6’7”, 175 lbs, guard/forward, is playing his first season at SMC after a year of prep school at Middlebrooks Academy, following graduation from Cathedral High.

“Coming from high school, he’s still a freshmen, so he’s going to have to work hard each and every day,” Jenkins said. “I know I get on his nerves from time to time, but that’s okay – I tell him I’m here to help him.”

Prior to his time at Cathedral High School, King spent his junior year at New Roads School in Santa Monica where he was named first team all-league and second team All-CIF after averaging 23.6 points per game. He will have three years of eligibility while at Washington State.

Washing State’s Coach Kent’s system and how they used to play at Oregon, was a big draw card for newly signed King.

“It’s fast-paced; shoot the ball fast,” King said. “He likes us to shoot threes and get up and down the court, so, it’s my kind of game.”

Coach Jenkins agreed, that this style of play will suit King, although his slight body frame needs a bit of work.

“He can really shoot the basketball,” Jenkins said of King. “He needs to work on his ball handling and he just has to get stronger for the next level – he’s going to the Pac 12 which is one of the elitist levels, that’s why it’s a pro-conference, he’s playing with guys who are going to be playing in the NBA one day, so he has to get stronger, but I think his upside is tremendous.”

In preparation for the Pac 12, King said he’s eating more and training hard.

“I’m lifting almost everyday, you know, I’ve got to be on it, everyday ‘cause I am competing against the best,” he smiled.

While playing Pac 12 is considered a huge achievement for any young player, King said that although he had planned to see a range of top schools, he quickly decided on Washington State to lock in his future prospects.

“I know that if I go there I’m going to be able to get a job outside of basketball, so that was actually the reason why I committed so fast,” King said.

King will start with Washington State for his sophomore year, 2015-2016.