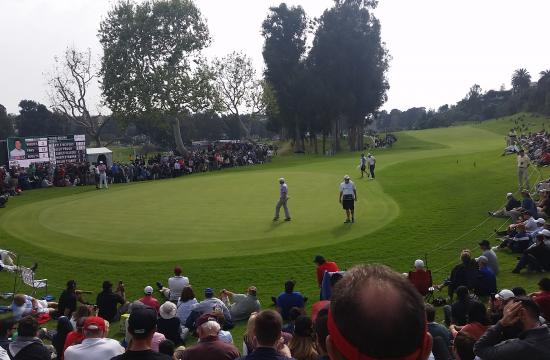 James Hahn birdied the third hole of a three-man sudden-death playoff on Sunday to win the $6.7 million Northern Trust Open at The Riviera County Club, his first victory on the PGA Tour.

Hahn began the round among eight players tied for seventh, four shots behind leader Retief Goosen.

He earned his way into the playoff with Dustin Johnson and Paul Casey by shooting a two-under-par 69, to go to six-under 278 for the tournament.

Hahn sank a 23-foot putt on the third playoff hole, the par-3 14th. Johnson’s putt for birdie rolled wide of the hole, giving Hahn the victory worth $1.2 million.

“Obviously, winning this tournament is the best thing that’s ever happened to me, but in about three weeks, I’m sure there’s going to be another reason why I’m going to be even more happy and more grateful,” Hahn said, referring to the due date of his pregnant wife Stephanie.

The 33-year-old Hahn was born in South Korea and graduated from the University of California, Berkeley in 2003 with a degree in American Studies.

Following stints on the Canadian, Korean, Pepsi, California Players and Web.com tours, Hahn joined the PGA Tour in 2013. His best previous finish was a tie for third in the 2013 AT&T Pebble Beach Pro-Am.

Hahn was among six golfers sharing the lead at the end of the first round at five-under-par 66, then shot a three-over-par 74 in Friday’s second round. He moved back into contention with a two-under-par 69 Saturday.

Goosen, who entered the round with a two-shot lead over Canadian Graham DeLaet, shot a four-over-par 75 today to drop into a four-way tie for eighth, two shots off the lead.

“My driving was poor and obviously 13 was the killer,” the 46-year-old Goosen said, referring to his double-bogey on the par-4 hole.

“My hand got wet in the rain and I should have backed off and dried, but I continued to hit and caught it off the toe and snap-hooked and it couldn’t end up any worse.”

Goosen shared the lead after the first round and led by one shot after two rounds as he pursued his first victory on the PGA Tour since the 2009 Valspar Championship.